The Harsh Possessor is the second Possessor boss Luigi faces in the Nintendo 3DS game Luigi's Mansion: Dark Moon. He is fought in the Tree House of Haunted Towers, where he has taken possession of a staircase. Major Parascope activity was coming from the top of the Haunted Towers and E. Gadd sent Luigi to go investigate the scene. 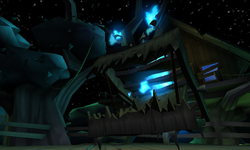 The Harsh Possessor while inside the staircase.

While possessing the staircase, the Harsh Possessor turns it into a giant mouth by turning the staircase inside-out. The wheels that allow the staircase to roll now forms a hinge that allows the mouth to open and shut. A blue flame burns on each of the steps of the staircase while a pair of lit torches forms its eyebrows and eyes. Its tongue is a red cord and is only shown after attempting to crush Luigi.

The Harsh Possessor's true form is that of a lean white ghost with two horns protruding from the front of his head. A fragment of the Dark Moon can be seen inside of him. 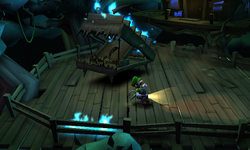 The main attack of the Harsh Possessor while he is inside the staircase is trying to lunge at Luigi. The staircase will attempt to attack Luigi multiple times before flying into the air and trying to crush Luigi from above. After the staircase has taken damage, it will start to throw two blue flames several times in a row. Its lunge attack also gets progressively faster.

While outside of the staircase, the Harsh Possessor can ram into Luigi twice in a row. After he finishes his second charge attack, he will be momentarily stunned and vulnerable to a Strobulb flash. If Luigi gets to the Possessor fast enough, he can stun the ghost before he has a chance to ram into him.

This possessor was hiding at the top of that giant tree in the Haunted Towers. He possessed a wooden staircase, of all things, and tried to eat Luigi! I thought he was going to faint!