The Gaddlight as seen from Mario Party 4 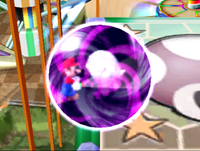 Mario prevents Boo from stealing his coins. When the player with a Gaddlight appears in the Crystal Ball, they are first seen standing and holding the Gaddlight compared to the usual scared animation.

The Gaddlight is an item used in Mario Party 4. When an opponent sends a Boo (from a Boo's Crystal Ball) to steal coins or a Star, the targeted player can automatically use the Gaddlight to flash light at the Boo, scaring it away (making the opponent unable to steal coins or a Star from them). It serves the same function as the Boo Repellent from Mario Party 3. The Gaddlight can be thrown away to free up space in the player's inventory, though this counts as the player using an item on that turn. This item does not work on the Big Boo in Boo's Haunted Bash.

The item's name indicates that it was invented by Professor Elvin Gadd. This is further evidenced by its German name, since his inventions are named Schreckweg 08/16 (Poltergust 3000) and Dreckweg 08/17 (F.L.U.D.D.). A symbol of his head (seen on most of his inventions) is absent from the item, however.