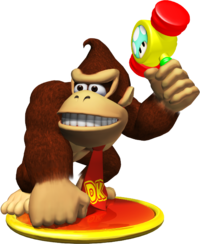 The MiniMega Hammer is an item found in Mario Party 4. The hammer either shrinks or enlarges the player who is hit on the head with it, giving them the effect of a Mini Mushroom or a Mega Mushroom. Although the player can choose who to use the item on from a list, the exact effect is somewhat more difficult; the symbol on the hammer (a Mini Mushroom or Mega Mushroom) rapidly changes and the player must use good timing to choose the desired effect.

The player with the hammer cannot inflict their own effect with the item (Mega or Mini) by hitting themselves. The player should be wary when using this item on someone else near them, because if the hammer makes the player Mega, the target can easily steal coins or use the extra dice to move further. However, it can be used to make another player bypass both Item Shops, the Star Space (as they can't trade for any stars while Mega), and other such events. The exception is Bowser on Bowser's Gnarly Party. If the target is changed to mini, they can possibly fit through the many gates of the maps. This could allow the player to play several Mini Mini-Games. However, their Dice Block will still only go from 1 to 5. On Bowser's Gnarly Party, if the player makes their opponent mega with the hammer, the target who is mega will get to do a Bowser mega minigame with Bowser if they get to Bowser (either Bowser Wrestling or Panels of Doom).