It has been requested that more images be uploaded for this article. Remove this notice only after the additional image(s) have been added. Specifics: Images for Mario Party 2 (including Baby Bowser's shop), Mario Party DS, and Mario Party Superstars are needed.

“Welcome to the Item Shop! Would you like to buy something?”
—Yellow Toad, Mario Party Superstars

Item Shops are a type of shop that appear in the Mario Party series, first appearing in Mario Party 2. They sell items to the player in exchange for coins and are located in one or more locations on each board in the games they appear in. When passed by, they may be entered by the player, and generally allow the player to purchase a single item from a limited selection.

In Mario Party 2, there is one Item Shop run by a red-shelled Koopa Troopa on each board. These shops have between two and five items for sale at a time, depending on the player's placement (between 1st and 4th place) and how many turns are left in the game, divided between the first 5 turns, the mid-game, and the last 5 turns. Generally, the lower-placed the player is and the later in the game the current turn is, the more valuable and greater in number the offered items will be. All items sold at the Item Shop cost at least 10 coins, and if the player does not have at least 10 coins when they pass by, or if they are already carrying an item, they will not be allowed to enter the shop. Additionally, the Item Shop closes on the last turn of the game, preventing any more items from being purchased.

Koopa Troopa's shops offer the following items depending on the player's placement and the number of turns remaining:[1]

Neither type of Item Shop ever sells Boo Bells or Bowser Suits. Bowser Bombs are not sold at Koopa Troopa's shops, but they may be sold by Baby Bowser's shop.

The prices of the items sold in shops are as follows:

When buying from Koopa Kid in Bowser Land, the prices that are charged are:

If a player visits the Koopa Kid store while wearing a Bowser Suit, he will instead give the player a Skeleton Key, Golden Mushroom, Magic Lamp, or Boo Bell, completely for free. 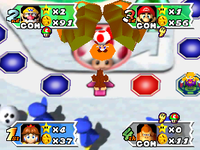 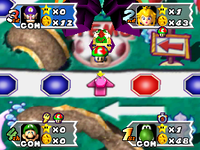 In Mario Party 3, there are two Item Shops on each board, and each time a player passes by one, it will randomly be run by Toad, whose shop is called Toad's Trading Post, or Baby Bowser, whose shop is called Baby Bowser's Joint. The two shopkeepers each have a different selection of items: Toad mainly sells items that directly benefit the player, while Baby Bowser mainly sells items that can be used to hinder opponents. Either shopkeeper is capable of selling Skeleton Keys and Item Bags (although Item Bags may only contain items sold by the shopkeeper that is offering the Item Bag, as well as rare items at Toad's Trading Post).[2] Item Shops offer between six and seven items at a time, and the player is allowed to purchase up to one item per visit.

Like in Mario Party 2, the particular selection of items available depends on the player's placement and the number of turns left in the game, once a shopkeeper is selected. Similarly to the previous game, more valuable items in greater numbers are generally offered to players in lower places, and as the game progresses. The player will be denied entry to an Item Shop if they have fewer than 5 coins, are already carrying the capacity of 3 items, or if it is the last turn.

Toad's Trading Post offers the following items depending on the player's placement and the number of turns remaining, in addition to Skeleton Keys and Item Bags (which are always sold):[2]

Baby Bowser's Joint offers the following items depending on the player's placement and the number of turns remaining, in addition to Skeleton Keys and Item Bags (which are always sold):

In addition to visiting the Item Shops on the board, Mario Party 3 also introduced a new way to access the shop system: the Cellular Shopper. When used, this item allows players to visit an Item Shop in the same way as usual from their current position on the board, while also allowing the player to choose between buying items from Toad's Trading Post or Baby Bowser's Joint.

The prices for the items in the shop are as follows: 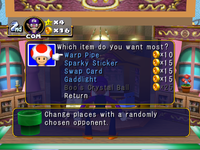 Mario Party 4 once again features two Item Shops on each board. In this game, they are run by the host of the board being played, and each shopkeeper has unique dialogue, but they are otherwise identical. Unlike in Mario Party 2 and Mario Party 3, the items offered by Item Shops are no longer determined by the player's placement or the number of turns remaining, but instead are largely random.[3] Shops always have exactly five different items for sale, at least one of which the player can afford (for example, if the player has between 5 and 9 coins, a Mega Mushroom or Mini Mushroom will be offered, since these items cost 5 coins). Much like in Mario Party 3, the player will be denied entry to an Item Shop if they have fewer than 5 coins, are already carrying the capacity of 3 items, or if it is the last turn.

On the Extra Room boards, Mega Board Mayhem and Mini Board Mad-Dash, Item Shops work differently from normal. While they still offer a "selection" of five items, all five of these items are always of the same type, chosen from Warp Pipes, Sparky Stickers, Super Mega Mushrooms, and Super Mini Mushrooms. If the player visits an Item Shop on one of these boards while carrying between 5 and 9 coins, five Warp Pipes will be offered, but the player will not be able to purchase any of them as they cost 10 coins.

The prices of each item are as follows:

In the Mario Party 4 Flash game previously available on the official Mario Party website, Item Shops would prompt the player and ask whether they want to purchase computer wallpapers or screensavers with their Coins. Unlike main series Mario Party titles, passing through an Item Shop counts as one dice movement.

In Mario Party DS, there are two Item Shops on each board, run by a Monty Mole. Four items are sold at a time, and more valuable items generally become available as the game progresses. This is linked to the turn number (regardless of how many turns are remaining), as certain items such as Block Sensors and Grab Bags are only sold during the later turns of a 20-, 25- or 30-turn game. Like in Mario Party 4, at least one item that the player can afford is always sold (for example, if the player has only 1 coin, a Halfway Dice Block will be offered, since it costs 1 coin). Unlike in any previous Mario Party title, any number of items may be purchased during a single visit to an Item Shop, and shops may be entered and purchased from even if the player is carrying the capacity of three items. If the player purchases an item in excess of the three-item limit, they will be forced to throw away one of their items. Item Shops may not be entered if the player does not have any coins or if it is the last turn.

Daisy at the Shady Shop

On the board Kamek's Tantalizing Tower, there is a secondary Item Shop run by a Toady called the Shady Shop. When this shop is visited, the Toady will forcibly sell the player a Dash Mushroom, Poison Mushroom, or Custom Dice Block for 6 coins. Whenever an item is bought from Toady, it will disappear from the stock until each item has been bought once, then the shop is refilled again.

In Mario Party Superstars, Item Shops are run by Yellow Toad. There is now one item shop in each of the original Mario Party boards (Peach's Birthday Cake and Yoshi's Tropical Island), and there are now three item shops in Horror Land and Woody Woods. The third Item Shop on Woody Woods is called the Forest Shop. They can have from as little as two or three items to as many as six items for sale, and up to one item can be purchased per visit. The item selection changes in the latter half of the game: