This article is about the minigame from Nintendo Land. For other uses, see Luigi's Mansion (disambiguation). 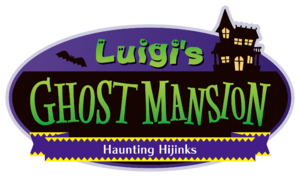 Luigi's Ghost Mansion is a competitive attraction minigame in Nintendo Land. It is loosely based on Luigi's Mansion. 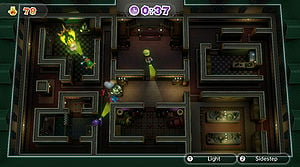 A ghost tracker uses their flashlight on the Gold Ghost while another revives a fainted member.

The game involves up to four players, wearing costumes of Luigi, Mario, Waluigi, and Wario, respectively (as dressed in player order), each armed with a flashlight, aiming to evade the Gold Ghost and use their flashlights to defeat it. The single player controls the Gold Ghost and must try to make the other players faint. If the Gold Ghost is near, a vibration is felt through the Wii Remote. Lightning also appears on occasion, making the Gold Ghost briefly visible.

When there is less than four players on the human side, then some Monitas join in to fill in the remaining spots and support them. They only follow specific routes on the map and turn off their flashlight if a player-controlled human approaches. They cannot be defeated by the ghost player and they can damage the ghost just like a human player. When there is only one human versus a ghost, the human player has three lives. If two humans are against the ghost, they have two lives each.

Occasionally, batteries spawn onto the map for players that have run low on batteries. The human players' batteries eventually run out as they continue to search for the ghost. Rarely, a larger, more powerful battery spawns on the stage that upgrades the flashlight the player is carrying to the Super Light. This flashlight is gold in color and has a star-shaped top. It has the ability to revive fallen players faster and deals damage to the ghost at a much faster pace.

on the GamePad. When this meter is filled up, all the energy in the human players' flashlights run completely out of battery. However the human players can avoid the energy-zapping portal by simply moving out of its vicinity. If a Monita is caught in the attack, they are stunned for a few seconds.

If the Mii dressed as the ghost wins against the Miis dressed as the humans, the message "Good night!" (the Game Over message in the Luigi's Mansion series) appears before fading to the results.

There are different layouts of the game depending on how many players there are. There is the Main Floor which is the starting stage of the minigame. It is a large basic mansion with many walls and awkwardly designed corridors. The Basement is unlocked second after a game has been completed on Main Floor. It is very similar to the Main Floor but the walls are replaced with large crates and it is more open for players to move freely without limits. Finally, there is the Research Lab as the third stage. This is set in a laboratory that has multiple conveyor belts that move in specific directions. The Storage Room is the fourth stage and features knights in armor that shake around when human players approach. The fifth stage is Monita's Rooftop. It features almost no areas for the ghost to hide in and Monitas patrolling the stage.

Professor Elvin Gadd is heavily implied to be the one describing the different courses in Luigi's Ghost Mansion, as they match his manner of speaking.