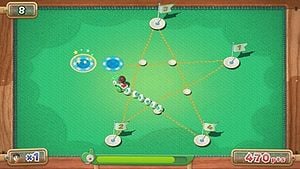 Yoshi's Fruit Cart is a minigame appearing in the Wii U title, Nintendo Land. It requires the player to draw a path for the Mii on the Yoshi Cart to follow through each course. However, only the view of the course displayed on the TV screen shows the fruit that must be collected and obstacles that must be avoided along the way to the goal. This minigame is one of two from the 12 games in Nintendo Land to utilize its

to draw paths on the touchscreen.