Not to be confused with Stewart.

“Haw haw! We stole a whole boatload of this place's Stupendous Stew for the boss's wedding chow. But I'm gonna head back up the volcano to finish off that stew...after I'm done with you!”
—Spewart, Super Mario Odyssey

Spewart is a stocky member of the Broodals, and is the group's entertainer. Like the other Broodals, he is from the Moon and found in Super Mario Odyssey, specifically in the Wooded Kingdom, Luncheon Kingdom, Bowser's Kingdom, and Dark Side. His name is a pun on "spew", referring to his method of attack, and the male name "Stewart".

He is dressed in a blue suit, black shorts, and wears a white cravat tie, along with a blue hat with a golden spiked ring, and is physically similar to Morton Koopa Jr., while his hairstyle resembles a drooping version of that of Ludwig von Koopa.

When advancing the design of Spewart, both the size and shape of his mouth as well as the way he used it to attack were taken in consideration.[1] 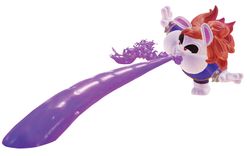 Spewart is first encountered in the Wooded Kingdom, where he tells Mario that he and the other Broodals already took the Soirée Bouquet. He attacks by spewing poison around himself, before going after Mario. Sometimes, he spits out a few drops of poison and chokes on it. Mario can clear away the poison using Cappy. Spewart's hat must be knocked off so that he can be stomped on. Each time he is hit, he retreats into his hat and spins around the arena, leaving trails of poison, coming out after a while or if Mario stomps on the hat. He is defeated after three stomps.

Spewart is fought again in the Luncheon Kingdom, during the mission "The Broodals Are After Some Cookin'", where he has stolen a pot of Stupendous Stew. He says he plans to go back to eat the rest of it after he defeats Mario. Unlike the other Broodals, his strategy is unchanged and the only difference is a larger battlefield and that he starts walking slowly towards Mario once he is done spewing poison. Spewart is also found in Bowser's Kingdom, as one of the pilots of RoboBrood.

Spewart's last encounter is on the Dark Side. He says he plans to take the Odyssey after defeating Mario. The fight against him here is largely the same as the one in the Luncheon Kingdom, but Mario now has the Moon's low gravity to contend with. He also returns alongside the other Broodals in the RoboBrood rematch on the Dark Side.

Is the vulgarity all an act?

Spinning around while spitting poison in a wide area, Spewart is the least subtle of the Broodals. But he also has an unexpectedly artistic side, as his poisonous ground-paintings show.