“I wonder where our Lochlady Dress is. I hope whoever wears it looks good enough in it to justify our heartache...”
—Lochlady, Super Mario Odyssey

Lochladies are mermaid-like creatures found in the region of Lake Lamode within the Lake Kingdom of Super Mario Odyssey. They are found in blue, pink, and silver color schemes. Each of them wear a kelp headdress and a pair of golden bracelets. No male counterpart to the Lochladies appears to exist; however, according to The Art of Super Mario Odyssey, male counterparts known as "Mermen" were originally going to appear to populate Lake Lamode within the Lake Kingdom but were replaced with Bubblainians in the final game.[1] Lochladies are known for their strength and flexibility, which lend to their professions as accomplished designers.[2]

Like many of the supporting characters, Lochladies will cower and refuse to talk to Mario if an enemy gets too close to them, regardless whether Mario has captured the enemy in question or not. One exception is an unnamed Lochlady who gives Mario a Power Moon if he approaches her while he is a Cheep Cheep.

Concept art of the Lochladies 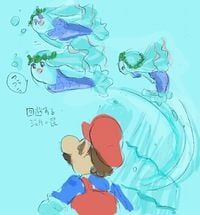 The Lochladies were designed as fashion designers, following the motif of the mermaid.[3] Their facial expression were designed so they had a certain charm to them, and another peculiar feature of the design are the sequins of the dresses that resemble scales.[3] They also visually resemble Amabie, a mermaid-like creature in Japanese folklore.