“Lookin' for the Binding Band, chumps? Too bad! The Boss has it now! And you guys ain't invited to the wedding!”
—Hariet, Super Mario Odyssey

Hariet is one of the Broodals, a group of evil, rabbit-like wedding planners appearing in Super Mario Odyssey, which are hired by Bowser to plan the wedding between Peach and himself. Her name is a variation of "Harriet" and may refer to "hare," a species related to rabbits, or the fact that she uses her hair to attack. She is the only female Broodal and wears a purple dress, gloves, pumps, and a little hat with a little bow on it over the left side of her hair. She is the Broodal in charge of pyrotechnics displays.

Hariet is fought atop the Inverted Pyramid in the Sand Kingdom in the mission Showdown on the Inverted Pyramid, which can only be accessed after the Moon Shards in the Moe-Eye Habitat are collected to complete Moon Shards in the Sand. When Mario reaches the pyramid's top where Bowser's Airship with Peach on board hovers, a cutscene starts to play, which shows the Broodals' Airship approaching. Hariet says a few words revealing that Bowser has already retrieved the Binding Band before Mario and Cappy arrived as well as tauntingly telling them that they aren't invited to the ceremony, puts on a spiky sunbonnet-shaped helmet and jumps off the Airship, attempting to fight the player.

In the fight, Hariet throws bombs at Mario using her braid, which he has to knock back by hitting them with Cappy. The bombs leave puddles of lava when they explode. After a while, if Mario doesn't knock back any bombs, she throws a much larger bomb which is attached to her hair and gets stuck in the ground, so that it can be thrown back easier. When Hariet gets hit by a bomb, she loses her protective helmet, allowing Mario to jump onto her head to score a hit. Then she puts on a new helmet, withdraws her body into it and starts flying around as an UFO while dropping numerous bombs onto the battlefield; as she does this, she laughs manically. After a while or when she gets hit by a bomb Mario threw back using Cappy, she stops her rampage, emerges from the helmet and starts throwing bombs using her hair again. By knocking one back at her and removing her helmet, she becomes vulnerable again, except this time she attempts to flee from Mario. After each hit, she drops ten coins, and after the third hit, she is defeated, disappears in a cloud of smoke and leaves behind a Multi Moon which adds three Power Moons to the player's total.

Hariet is fought a second time in Bowser's Kingdom. She once again taunts Mario for not being invited to the wedding and attacks. This time, she has two braids, allowing her to throw more bombs. The strategy to defeat her remains the same, though. She also helps pilot the giant robot, RoboBrood.

The final fight with her is on the Dark Side of the moon, where she is the second Broodal fought (after Topper). She scolds Mario and Cappy for barging into the Broodals' kingdom and says that she still has things to teach them. Aside from the moon's different gravity, the fight is the same as in Bowser's Kingdom. She also helps pilot the RoboBrood in its second fight against Mario (also on the Dark Side), in a fight quite similar to the one in Bowser's Kingdom.

As of August 1, 2018, the player can purchase a costume at the Crazy Cap shop based on Hariet. 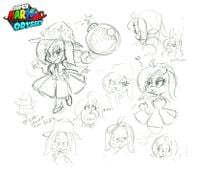 Two distinctive aspects of Hariet's design are the use of hair to attack Mario and the hard hat that protects her head.[1]

It's best not to get her mad.

The least predictable of the Broodals, Hariet is most often found throwing bombs with her hair. When her homemade bombs explode, they leave a pool of fire on the ground, so try knocking them away before they explode. While it may seem reckless to have filled her hat with bombs, Hariet is devious and keeps a lot of spare explosives with her, so watch out!