This article is about the recurring game mechanic. For Palutena's up-special move in the Super Smash Bros. games, see Palutena § Warp. 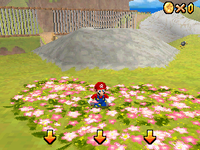 Mario warps to a flower patch in the Bob-omb Battlefield in Super Mario 64 DS.

Warping is an action in which a character instantly travels from one location to another. The first Mario game to feature warping is Super Mario Bros. Warping is most often done through the use of Warp Pipes. Some installments of the Super Mario series have Warp Zones, which allow for even farther travel.

In Super Mario 64, there is an invisible warp (also known as a Warp Point)[1] in ten of the courses: the Bob-omb Battlefield (which has two); Whomp's Fortress; Cool, Cool Mountain; Lethal Lava Land; Shifting Sand Land; Snowman's Land; Wet-Dry World; Tall, Tall Mountain; Tiny-Huge Island; and Rainbow Ride. The warps allow Mario to quickly travel between distant areas within the same course. In Super Mario 64 DS, once Mario or another character has warped, three down arrows briefly appear to point to the Touch Screen and show where he has been relocated.

In the Donkey Kong Country and Donkey Kong Land series, this action is done through Warp Barrels, although some bonus rooms can indirectly be used as small warps because the exit back into the main level is often farther from the start. In Donkey Kong 64, warping is done from activated Bananaport Pads, though also within the same area.