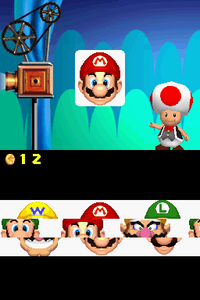 Mix-a-Mug is one of Yoshi's minigames in Super Mario 64 DS. To unlock it, Yoshi must capture a rabbit in the Mushroom Castle. This minigame is similar to the Spade Panel minigames from Super Mario Bros. 3.

Line up the slots on the Touch Screen to form a face. Win more coins by matching the center face in the slots to the one on the top screen.