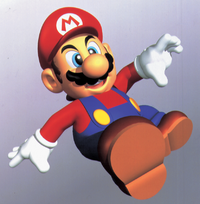 The Slide Kick[1][2][3] is a move that can be performed by Mario in Super Mario 64, as well as Yoshi, Luigi, and Wario in Super Mario 64 DS. To perform this move, the character needs to be running, then the player needs to hold the crouch button and press the attack button. Inputting the commands correctly causes the character to begin sliding on the ground with his foot outstretched, damaging enemies in the way. While Yoshi is able to perform the move, due to his low attack power, some enemies, such as Boos, are impervious to the attack.