This article is about the secret course in Super Mario 64 and its remake. For the mission in Rainbow Ride, see Somewhere Over the Rainbow.

Map of Over the Rainbows in Super Mario 64 DS

The platforms around this course are clouds that Mario has to fly between using the Wing Cap or cannons. If the player falls into the abyss below, they will be dropped into the lake in front of the Mushroom Castle with no life lost. However, in the N64 version, if the player loses all health by taking damage, they will respawn outside the level, but in the DS version, if the player loses all health, they will still respawn outside the castle, and the number of lives remaining will show up once the player regains all their health and gets out of the water.

To open both cannons, the player needs to make it to a large pink platform with the Bob-omb Buddy (who is located next to the lower cannon) and talk to him. In the DS version, another Bob-omb Buddy appears next to the upper cannon and can detect the Red Coin locations. Two of the clouds are transparent, and Mario can fly right through them. Trying to stand on transparent clouds will make the player fall off. One contains a Red Coin (only in the N64 version), and the other contains a 1-UP Mushroom. One other cloud has a group of green poles hanging down from it.

In Super Mario 64 DS, the course went through a few changes: Two trees and a Black Brick have been added, and the Red Coin that was on one of the transparent clouds was moved to the regular cloud located under the group of green poles. 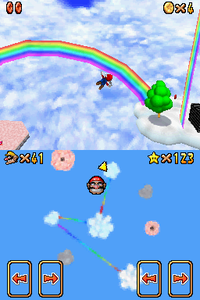 Wario wearing Mario's cap while he flies through the sky

This course has two Power Stars to collect, one of which is exclusive to the DS version.

Using the Wing Cap and cannons, Mario must fly around the level and collect the eight Red Coins to make a Power Star appear at the Star Marker on the cloud that the player started on.

A Black Brick can be found on one of the clouds. Wario must get to the block (either by long-jumping or by the use of a cannon) so he can break it to earn a Power Star.

Over the Rainbows coverage on other NIWA wikis: