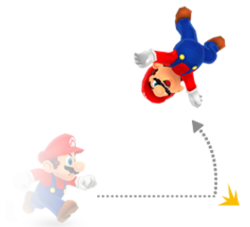 Mario performing a Side Somersault in Super Mario 3D Land

The Side Somersault (or side somersault), named Side-flip by Prima Games' guides and also named Cartwheel,[1] is a high jump that debuted in Super Mario 64. It typically grants a small amount more height than the Backwards Somersault. It is useful when the player wants to immediately jump high to reach high ledges. To use it, the character must run in one direction, then simultaneously turn to run in the other direction and jump.

In Super Mario Sunshine, Mario needs to only face in one direction and turn around; therefore, Mario could execute a Side Somersault with almost no space to move.

Bowser uses a Side Somersault in Super Mario Galaxy as one of his moves in the second battle against Mario.

This jump comes in handy when trying to reach places a standard jump can't or for getting above large enemies.

In this case, face away from the wall and tilt

back to the right and press