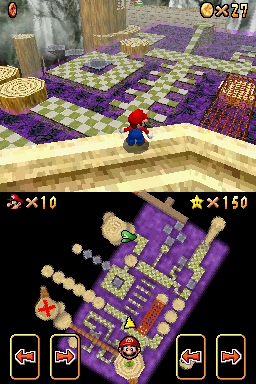 Goomboss Battle is an additional course in Super Mario 64 DS. The course is accessed through the Mario painting in the room behind the Rec Room, which can be unlocked by having eight Power Stars. Defeating Goomboss at the end of the course grants the player the Mario Key needed to rescue Mario.

The course is made up of several platforms situated over a toxic cloud and a large abyss. The platforms are either stationary, tilting, or rising platforms. Several Goombas are also seen moving around on the platforms, and Piranha Plants are found sleeping in certain areas. The player starts on a tall platform with a ramp the player can slide down. In the center of the stage is a mesh grate the player can hang and swing from. Also in the center of the course is a Brick that contains a mushroom. In the southern portion is a long platform that ends in a tall wall only Mario can wall-jump up. To the east is a tall platform with several tilting platforms leading to a red block to the north of it. The northwestern segment of the course has a pole with a Lakitu circling it that the player can climb up to reach the bridge that leads to Goomboss. On the bridge are several Goombas, and a Spinning Heart and Piranha Plant are placed just before the entrance to Goomboss.

Map of the battle area

When the player falls down the hole at the end of the bridge, they are brought to a circular arena where they have to fight Goomboss. Depending on whom the player is playing as, the strategy to defeat Goomboss is different.

If the player is playing as Yoshi, Goomboss will create a row of Goombas behind him. Yoshi must circle around Goomboss, eat a Goomba, and then turn it into an egg. After creating an egg, Yoshi has to throw it at Goomboss by using

. With every hit, Goomboss grows, turns around, and spawns more Goombas behind him. After Yoshi hits Goomboss a total of three times, he is defeated.

If the player is anyone other than Yoshi, Goomboss will create a row of Goombas in front of him. The player has to punch the Goombas into Goomboss in order to attack him. With every hit, Goomboss grows and creates more Goombas. After the player attacks him for the second time, Goomboss creates more Goombas both in front of and behind him. Punching one more Goomba at Goomboss defeats him. The player can also kick Goomboss's face or back to obtain a mushroom, which can be used to defeat many Goombas and easily punch or kick him.

Two Power Stars are obtainable in this course.

Scattered throughout Goomboss Battle are eight Red Coins, though in order to collect them all, the player needs to have Mario and Luigi unlocked along with the Power Flower. (Wario is not technically needed since the Black Brick hiding one of the Red Coins can be broken by any character with a mushroom.) The locations of the Red Coins are:

When every Red Coin is collected, the Power Star appears at the Star Marker just before the rising platforms. 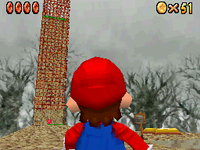 The Star Switch of the course

As Mario, the player needs to make it to the long platform to the east of the starting area. On the platform is a Star Switch, and pressing it causes the Power Star to appear in the Star Sphere at the top of the wire shaft. Mario needs to wall-jump up to the top and collect the Power Star before the Star Switch's timer runs out.