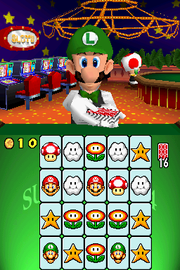 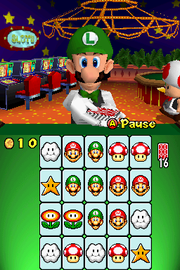 Pair-a-Gone is one of Luigi's minigames in Super Mario 64 DS and a Table minigame in New Super Mario Bros. In addition to stating the minigame's basic mechanics, the name "Pair-a-Gone" seems to be a pun on "paragon," which can mean "a sole example" or "to rival," both of which can be thought of as relating to this minigame and the skill required to succeed at it. The gameplay is identical to that of Nestor.

Another version of the minigame called Pair-a-Gone and On (which is somewhat similar, though it lasts forever) also appears as one of Luigi's minigames in Super Mario 64 DS.

The game consists of 50 cards with pictures on them, which the player must match either up, down, left, right, or diagonally. To win coins, the player must be able to match all of the cards. If the player is unable to match all of the cards, one coin is deducted for each card remaining and a Star is deducted. If all the cards are cleared, coins are given and a Star is obtained, which puts more cards in number and/or kinds in the deck after a certain number has been collected.

This lists the different types of cards the player can get.

*Appears only after the player gets a certain number of Stars.