This article is about the boss that appeared in New Super Mario Bros.. For Pokey relatives which appear in Paper Mario, see Pokey Mummy. 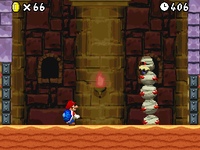 Mummipokey[1] is the second boss in World 2 of New Super Mario Bros. He is a mummified Pokey with red spikes, along with a bear trap-like jaw from which he spits projectiles.

During battle, Mummipokey attacks by popping out of the ground at different places throughout the battle. Mario or Luigi must jump on his head three times to defeat him to gain access to World 3. Mario or Luigi can also ground pound on his head to reduce the number of hits he takes, as Ground Pounds deal double damage. The height of how far Mummipokey protrudes varies, ranging from 2 to 5 segments, including the head. The time he stays surfaced is dependent on his size: the longer the segments are exposed, the longer Mummipokey stays surfaced. Sometimes, Wall Jumps are required to get enough height in the air to land on his head. Mummipokey can also spit a projectile ball at Mario. Another way to defeat Mummipokey is to shoot him with 15 fireballs or use a Mega Mushroom.

Access to World 4 can be earned if Mummipokey is defeated while Mario or Luigi is in their mini form. Since the Mini Mushroom causes Mario and Luigi to get both smaller and weaker, they must Ground Pound Mummipokey to apply any damage.