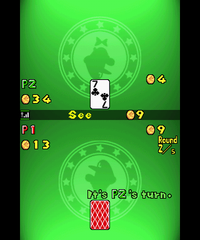 Luigi's Thrilling Cards is a Table minigame in New Super Mario Bros. It is played the same way as Texas hold 'em (but without the community cards). As this minigame requires at least two players, it is playable only in the Vs. Battle mode.

Each player is dealt one card, but the player cannot see their card. Instead, the player sees the cards of all the other players. Without knowing what their card is, the player must bet on whether their card is higher than the other cards. The player who is selected to start can bet up to five coins, and each of the other players can either raise up to five coins, call the original bet, or fold. The player whose card is highest wins all the coins in the pot. Each player must bet at least one coin. If they want to bet more, they can tap "Raise." If they are done betting, they can tap "Next." Once they bet five coins, they cannot bet more. The next player gets to tap "Raise," "Call," or "Fold." If they tap "Fold," they cannot win and they do not have to add any more coins. If they tap "Call," they bet the same. If they tap "Raise," they bet more, until they bet five coins higher than what the previous player bet. Once everyone who has not folded bets the same, the player with the highest card gets all of the coins. Ace is the highest, and 2 is the lowest. If more than one player has the same number, the suits break the tie. The suits, from lowest to highest, are club, diamond, heart, and spade.

Everything rides on the strength of a single card. You don't know what you have, but you can see what everyone else has. Think carefully before you bet!