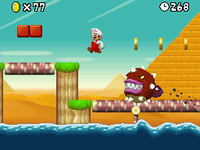 The Spike Bass as seen in-game

The Spike Bass[1] is an enemy in New Super Mario Bros. It resembles an oversized brown tadpole with a pale underbelly. It also has beaming yellow eyes, sharp teeth, and spikes all over its body.

The Spike Bass appears in World 2-A and World 3-C. The Spike Bass jumps from the water and tries to attack Mario or Luigi in a pattern extremely similar to that of a Boss Bass but with no danger of being eaten. This enemy can be defeated with a fireball, a Koopa Shell, a Starman, or a Mega Mushroom. However, once it is defeated, another Spike Bass will appear after a few seconds to continue the pursuit. Later games give this enemy's behavior to Porcupuffer, which formerly did not jump.