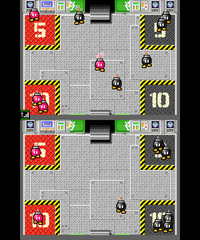 Bob-omb Sudden Death is a 1-on-1 minigame in New Super Mario Bros. It is featured in the Vs. Battle multiplayer mode.

The game plays similarly to Sort or 'Splode. The players must drag the Bob-ombs and Bob-omb Buddies that are conveyed into the room to their respective color-coded sides. Since it is color-coded, Bob-ombs must be placed in the black area, and Bob-omb Buddies must be placed in the red area. As opposed to two areas like in the single-player game, there are four in this game: two black and two red. Each one has a number on it: a "5" for the two on top, and a "10" for the two on the bottom. If the number of Bob-ombs printed on the section is placed there, then they are launched over to the opposing player's field. If a player places a Bob-omb or Bob-omb Buddy in the incorrect section, or a Bob-omb remains on a player's side without being placed too long and explodes, that player loses.

Guide the Bob-ombs to their like-colored carpets. If one gets to the wrong carpet...KA-BOOM!!! Fill carpets with enough Bob-ombs, and they'll march off to your opponent's screen.