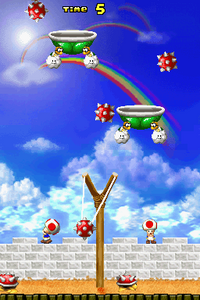 Lakitu Launch is one of Wario's minigames in Super Mario 64 DS and an Action minigame in New Super Mario Bros.

The music used in this minigame is an arrangement of the track played in Big Boo's Haunt's merry-go-round, like in Bingo Ball and Slots Shot.