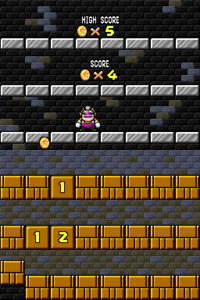 Intense Coincentration is one of Wario's minigames in Super Mario 64 DS. A rabbit, once caught from the Mushroom Castle by Wario, unlocks this minigame.

The minigame's music is an arrangement of the Super Mario Bros. Underground Theme, like in Coincentration, Hide and Boo Seek, and Whack-a-Monty.

In this minigame, Wario hits a Moneybags into the sky. The Moneybags then falls to the ground and drops some coins; however, it drops fewer coins than in Coincentration (there are 16 instead of 40). All of the coins then fall to the lower floor, where multiple Brick Blocks are, and make their way into different Brick Blocks. The player must touch the blocks that coins fell into with the stylus. If a block without coins in it is touched, the minigame will end and any coins the player found up to that point will be added up and become the player's score.

There aren't as many falling coins this time around, but that won't stop Wario. Watch the coins carefully!