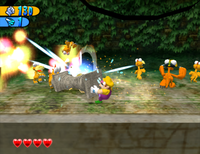 The Wild Swing-Ding is a powerful move that Wario can perform in Wario World. When grabbing an enemy or a heavy object, if the player spins

in a circle in either direction, Wario will start spinning the enemy. After a few spins, auto-spin takes over and Wario spins without input from the player. At this point, it is possible to control Wario with

. After about 23 spins, Wario lets go of the enemy on his own, though the player can press

at any time to end the move. In addition to defeating the enemy Wario is currently holding, the Wild Swing-Ding damages or defeats any enemy that Wario contacts while he is spinning. In many cases, this move is required to progress through levels, such as using the move to raise platforms or open gates by spinning a nearby wheel.