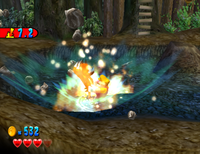 Wario using the Piledriver move on a large Magon.

The Piledriver is a powerful move that Wario can perform in Wario World. By picking up an enemy, the player can then jump and press

. Wario will spin in the air and pound the enemy headfirst into the ground, almost always defeating it. In addition, the Piledriver sends out a shock wave that can damage or defeat any nearby enemies. It is similar to the Ground Pound, as both moves are used by pressing

in mid-air. The Piledriver and Ground Pound are both used for entering through trapdoors; steel trapdoors can only be opened with a Piledriver.