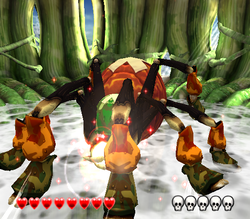 Spideraticus during the boss fight.

“Up ahead is the giant Spideraticus! Don't get stuck in the sticky spots of its web or you won't be able to jump! You can use the Glue Globes the monster spits out to get a closer look! Oh! Use a Dash Attack in the tug-of-war!”
—Spriteling, Wario World

Spideraticus is a gigantic spider boss whom Wario must defeat at the end of Beanstalk Way during the events of Wario World. Spideraticus is a large black spider with a brown abdomen. It wears a green military helmet on its head, partially obscuring its eyes, and wears combat boots on each of its feet. A bandage is present on top of both the helmet and its abdomen. The arena consists of a network of tree roots with Spideraticus's giant spider web taking up most of the stage. Wario cannot jump while on the web, so he must stay on the outside until an opportunity to attack arises.

Spideraticus has quite a few attacks. The first is a shockwave attack that must be jumped over. When Spideraticus has two or less health skulls remaining, it adds another, faster shockwave. The spider boss's second attack is to fire homing bursts at Wario. The lower Spideraticus's health, the more bursts are shot. The final shot always remains for a longer time.

Another attack Spideraticus could enact is to shoot five Glue Globes out of its mouth and suck them back in one by one, giving Wario a chance to attack. Wario must attack by Ground Pounding the boss on its bandaged head and back. Spideraticus may also shoot a small, almost invisible web at Wario to bring him in closer for a bite. If caught, he must dash away to free himself from the sticky string. Finally, Spideraticus may simply bite Wario if he gets too close.

Spideraticus is the second of the three bosses of Thrillsville, preceded by the Winter Windster and succeeded by Red-Brief J.