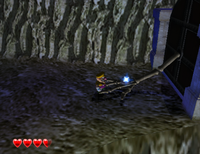 “You've gotta beat the Big Bone-Fist up ahead or you can't move on! That thing is bad! If you watch carefully, though, it'll reveal its weak point directly after its slam attack!”
—Spriteling, Wario World

The Big Bone-Fist is an enemy encountered in Wario World. It appears twice in Horror Manor, and as its name implies, it is a large skeletal hand attached to a wall that Wario must defeat in order to proceed in the level. The Big Bone-Fist attacks by grabbing Wario and throwing him, shooting energy rockets at him, and attempting to slam him. The first attack can be escaped by wiggling the Control Stick. The other two can simply be dodged.

Oddly, despite the name, the Big-Bone Fist never makes its hand into a fist.