This article is about the course in Super Mario 64. For the racecourse, see DS Tick-Tock Clock.

“There's something strange about that clock. As you jump inside, watch the position of the big hand.”
—Toad, Super Mario 64

Tick Tock Clock appears to be changed more than any other level in the DS remake, with many areas altered for easier difficulty, removing elements such as the triangular blocks and fog effects, and repositioning several areas of the level. It is one of two courses with both a Switch Star and Silver Stars, the other being Shifting Sand Land.

Tick Tock Clock is referenced in various other games. It receives a racetrack in Mario Kart DS, which returns in Mario Kart 8 and Mario Kart 8 Deluxe. The Mario Party 3 minigame Tick Tock Hop takes place on the clock's painting from Super Mario 64; the minigame returns in Mario Party Superstars. In the Super Mario Mash-up in Minecraft, there is a painting of the entrance to Tick Tock Clock. Luigi's Top Gear Sentry weapon in Mario + Rabbids Kingdom Battle references Tick Tock Clock, as the description mentions that the gear wheels on the weapon were taken from an old clock tower at Peach's Castle. 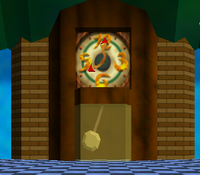 The player starts at the base of the clock's mechanics. In the DS version, there is additional ground around the base of the clock, and Bob-ombs fall and attack the player in this area. To the left of the starting area are several ascending green platforms that spin if time is not still, along with a Spinning Heart below them; these green platforms lead up to the area with the first rotating hand and are where all of the Red Coins are placed. In front of the player's starting position is a large pendulum followed by a Conveyor Belt and a rotating block. Afterward is another pendulum followed by a ramp leading to three rotating blocks, followed by the platform that the earlier green platforms lead to; it has a large clock hand swinging around nearby that brings the player to the third Power Star. This platform has a yellow block with coins, as well as a flame thrower nearby.

After the hand are a number of spinning platforms leading to a caged Power Star, followed by a small lift above, then a pole with an Amp circling it. After the player climbs up the pole, the path splits: To the left are a Heave-Ho and an area with a spinning triangular platform and two pendulums, leading to the second Power Star. To the right of the pole are lifts leading farther up the clock. Above the lifts are rotating blocks leading upward, with a mesh floor with Moving Bars behind them. Up the rotating blocks is a bending platform with Moving Bars placed under a cage that contains a yellow block full of coins. Afterward, a couple of Conveyor Belts lead to a long bending platform with several spinning platforms and triangular blocks (or square blocks in the DS version) breaking it up and a large platform in the middle. At the top of the platform is another clock hand that can bring the player to an area with a Thwomp, which can carry the player to the fourth Power Star.