This article is about the minigame from Super Mario 64 DS and New Super Mario Bros.. For the microgame from WarioWare: Get It Together!, see Wanted. 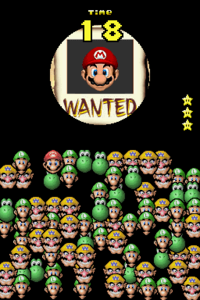 Wanted! is one of Yoshi's minigames in Super Mario 64 DS and a Puzzle minigame in New Super Mario Bros. Its name refers to when police want to question or arrest a suspected criminal.

The minigame's music is an arrangement of the minigame theme from Super Mario Bros. 3.

In this minigame, the player has to find one of the four characters (Mario, Luigi, Yoshi, or Wario) amongst a large crowd of the others by tapping whichever of their icons is shown on the Wanted poster on the top screen with the stylus. As the player advances, the minigame increases in difficulty, adding more characters, hiding them behind other characters, and even having the icons move. The player starts with 10 seconds on the first round, and they gain five seconds by tapping the correct character, but they lose 10 seconds by tapping any other one. The timer has a maximum time limit of 50 seconds at one time. The highest score the player can obtain by clearing the levels is 9,999; afterwards, the minigame continues, but the score counter and level number do not increase. The minigame ends after the player runs out of time, after which the location of the correct character is revealed. In this minigame, Luigi is the most common character to find, while Yoshi is the rarest.

In multiplayer, the difficulty can be adjusted, and the harder it is, the harder it is to find the right character. The timer starts at 30 seconds, and no time is added or removed. If someone taps the incorrect character, that player will lose one point each time. If they tap the correct character, they will get one point, and a new character will be shown. When the timer reaches zero, whoever has the most points wins.