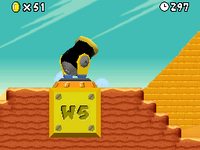 A Warp Cannon in World 1

lead to Warp Cannons which launch Mario or Luigi to a later world (the first two to World 5, then 6, 7, and 8, respectively). Here, they are timed and cannot be exited without usage, unlike in later games. In this game only, the environment of the destination world can be seen in the background.

A Warp Cannon in World 1

A Warp Cannon in World 3

In New Super Mario Bros. 2, Warp Cannons are blue, and when they are entered, a countdown appears. When the countdown reaches 1, Mario or Luigi is shot out into a nighttime level with a Super Mario Bros. 3 end-of-level-style background. Mario/ Luigi constantly dash in these levels, even if the buttons are not pressed, in a similar fashion to Super Mario Run levels. They usually contain common enemies in the cannon's 'home' world; at the end of each one, a sign appears pointing right, at which Mario/Luigi jumps out of the level. Afterwards, the player ends up in another world. There is a Red Coin challenge in each cannon stage, which yields a Gold Flower in the spare item slot upon completion. Unlike most other stages, Assist Blocks will never appear. The levels where they are unlocked are the following: World 1-

Warp Cannons also appear in the Flower Cup tournament of Mario Sports Mix, in alternate routes. They launch the player to other areas.

These cannons also make an appearance in Fortune Street, on the Yoshi's Island, Delfino Plaza, and Bowser's Castle boards. In this game, they are used to blast the player to a square occupied by another character. The square is chosen by the player.