"Rhino Dino" redirects here. It is not to be confused with Dino Rhino.

Reznors (alternatively pluralized as Reznor),[1] also called Reznor Rhinos[2] or Rhino Dinos,[3] are fire-breathing Triceratops that made their debut in Super Mario World. According to the game's instruction manual, they were cursed by Bowser.[1] They are mid-bosses that Mario and Luigi fight in fortresses found everywhere on Dinosaur Land. They are now found in the Mushroom Kingdom since their appearance in New Super Mario Bros. 2. Similar to how the Koopalings are named after various musicians, Reznors are named after Trent Reznor of the industrial rock band Nine Inch Nails.[4] 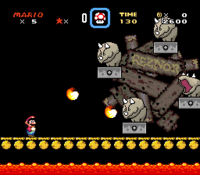 Reznors on the rotating platforms

In Super Mario World, Reznors spit fireballs at the player. Caped Mario or Caped Luigi can dissipate the Reznors' fire with his Cape. Mario must hit their platforms from below or shoot fireballs at them to defeat them. The player has a limited amount of time available to knock off the first and second Reznors and then jump to one of their platforms as the floor begins breaking away, exposing the molten lava below at the start of the battle. If the player does not defeat the rest of the Reznors promptly, they will have to jump onto one of the abandoned platforms and fight from there. It is, however, possible to defeat all four without doing so.

Reznors are the bosses of four fortresses scattered through the areas of Dinosaur Land: the Vanilla Fortress, the Forest Fortress, the Chocolate Fortress, and the Valley Fortress. The four Reznor sets all behave the same.

A group of Reznors, as they appear in New Super Mario Bros. 2

Reznors reappear in New Super Mario Bros. 2 as the game's tower bosses, and their battle theme is a cover of the Super Mario World boss battle theme. They now roar before the battle starts. Their appearance has changed slightly, with their lower jaws and belly having a lighter tone, and their heads redesigned to better resemble those of Triceratops. The platforms they stand on are now coin-giving Long ? Blocks, and the word "REZNOR" on the boards behind the wheel is gone. Unlike in Super Mario World, where four of them always appear on a single four-platform wheel, Reznors appear either in groups of two or four, and their wheel and bridge setups can also vary. After defeating half of them, the remaining Reznors roar and stomp their blocks, causing the bridges near them to collapse, much like in Super Mario World. They do not attack as frequently as they did in their debut game, and the bridges do not collapse as quickly. Reznors can be defeated when Mario hits the block underneath them, hits them with six fireballs or one gold fireball, or simply touches them while under the effects of the Invincibility Leaf. If defeated by a gold fireball, they will give thirty coins each.

Although Reznors themselves do not appear in Mario Golf: World Tour, a Reznor costume is available for Miis to wear, and they can also use a ball and set of golf clubs that are based on a Reznor.

Later in Super Mario Adventures, several Reznors, riding their spinning platforms, can be seen at Bowser's wedding to Princess Toadstool. 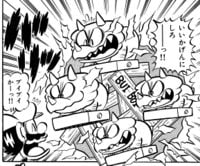 In the second 4-koma of the first volume, they attempt to spin very quickly in order to make it harder to hit them, but due to the speed, they fall off their platforms from dizziness.

They reappear in volume 4, where Mario tosses Yoshi to their contraption, making three of them fall. The remaining Reznor attacks Mario directly by charging at him, knocking Mario onto a Switch Palace. Inside, there are many Spinies and a Gray P Switch. Mario uses the switch to turn the enemies into Gray Coins, score multiple lives, and clone himself into Mario x99, who then defeat the Reznor.

In the Super Mario Mash-up in Minecraft, Ravagers are replaced by Reznors.

★Reznor
A dinosaurian character who works as the boss of Koopa's fortresses. A reclusive dinosaur who sold itself to evil, it doesn't want to talk about its relationship with Yoshi.

Reznor
Tribe: Dinosaur clan
Disposition: First person to arrive
Game appearances: World
Fire-breathing dinosaurs guarding the fort
A rhinoceros-like dinosaur with a chiseled head. It has a silly face, but it rides on a lift that whirls around like a Ferris wheel and shoots flames one after the other. Four of them always attack together.

The boss of the fortress. Four of them ride on a set of lifts and spit fireballs at you.