It has been requested that this article be rewritten and expanded to include more information. Reason: add info on the enemies and fusions seen in this book 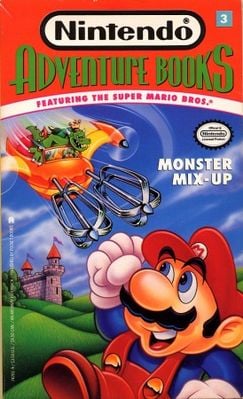 Monster Mix-Up is the third installment in the Nintendo Adventure Books series, released on July 1, 1991[1][2]. It is notable for being the only book in the series to feature Toad as a main character, alongside Mario.

The Story from the Back Cover:

What Has the Head of a Koopa Troopa and the Body of a Cheep-Cheep?

One of King Bowser Koopa's new mega monsters, that's what. Mario discovers that Bowser is making new and improved Koopa creations by combining Mushroom Kingdom royals with his own creepy creatures. When Mario tries to stop him, the Mario Bros. get mixed-up in ways they never dreamed possible.

As in all Nintendo Adventure Books, you control the action. Only you can make the choices that allow Mario to beat Bowser, Lemmy Koopa, and their fiendish accomplice, the Monster Mixer. Help him crack codes, solve puzzles, conquer mazes, and subdue enemies. You and Mario must outwit the Koopas at their own game-or go down in final defeat!