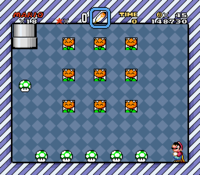 Mario playing the bonus game in Super Mario World. Here, a "perfect game" of nine Fire Flowers rewards him with eight 1-Up Mushrooms.

The bonus game is a special minigame in Super Mario World. It can be entered only by collecting 100 Goal Stars at the Giant Gates. When this is done, the bonus game automatically starts just after the "iris in" effect at the end of the level.

The bonus game takes place in a Switch Palace-styled room that Mario or Luigi enters via Warp Pipe. There are nine Item Box-like blocks, eight of which are circling around the ninth. The ninth block is the only one that has a stable item in it (a Super Mushroom, Fire Flower, or Super Star); the others are constantly changing their items. The player's task is to hit the circling blocks from below to stop their reels on a matching item. The actual game works just like tic-tac-toe: Getting three of the same item in a row (vertically, horizontally, or diagonally), no matter which item it is, earns the player a 1-Up Mushroom. The player can win up to eight extra lives.

It is impossible to get exactly seven 1-Up Mushrooms in this bonus game. All attempts to do so either miss the seventh or add an eighth.