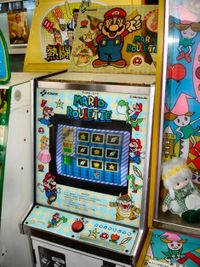 Mario Roulette (マリオルーレット) is a Japan-only medal game developed and manufactured by Konami and released on December 13, 1991, being one of the first medal games from the Mario franchise. The graphics and music are based heavily on Super Mario World and the gameplay of its bonus game. 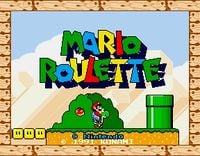 The title screen of Mario Roulette

Mario is the main character that appears throughout the game mounted on Yoshi. During the attract mode, a cutscene showing Mario mounted on Yoshi traversing a scenario like in the title screen (image above, note that it is similar to the gameplay of Super Mario World) showing the name of the game after a few seconds. Then an instructional video is shown where Mario explains how to play. After this, there is a demo of the game in action, and then it goes back to the title.

After inserting up to three medals (a kind of currency that is often exchanged for prizes or to play again) out of the game title screen, the game begins. The more medals the player wagers, the higher the prizes. The game consists of a wheel with 8 black squares, showing an icon of an item.

These items are Mushrooms, Cape Feathers, Stars or the Fire Flower. These symbols are turning beside one at the center beside one that is in the center and stopped at first.

If the symbols match the center to form lines, the player wins, and the screen flashes the symbols that were made to win with green "Win" marks. Mario strikes his victory pose as the bonus clear music from Super Mario World plays, and then a screen with a picture of Mario in a yellow circle on a blue background striking a victory pose with the word "COIN" and the number of prize winnings appear, and the player receives them. The amount of prize winnings depends on how many lines of the same symbol are hit and what symbols are there, with greater winnings if the same symbol is lined up. If the player cannot align the icons so right, or center stop icon into a picture that shows Bowser, he loses the round. Mario dies with the death music for the former, and all squares turn into Bowser with some ominous music for the latter. If the player gets Peach, it acts as all symbols, the princess rescued theme plays, and Mario strikes his pose. Then, a cutscene is shown saying "BIG BONUS" with the invincible theme playing, and Mario hitting a block that makes coins come out of it. After ten coins, it comes back to the "COIN" screen. The amount of medals won with Peach is far greater than a normal win.

After winning and losing, the game returns to attract mode for the person to play again.

It accepts coins of 10 and 100 yen, and is capable of storing 1000 coins of 100 yen. Illustrating the machine were some artworks from Super Mario games, primarily Super Mario World. Each machine cost around 320,000 yen.