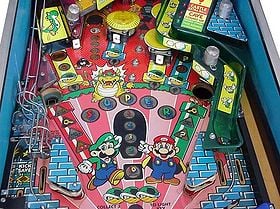 View of the lower playfield.

The pinball machine contains many Mario themed interactive features, such as on-field artwork that lights up during gameplay and the main objective of rescuing the princess. There are three flippers; the third found at the top of the playfield on a raised, separate Yoshi-themed area. Underneath this raised area is Luigi’s cave. A blue revolving castle is located at the top of the playfield, which the player is able to "destroy" by shooting at it while "Super Mario". This can be achieved by lighting up the letters that spell S-U-P-E-R, located near the middle of the playfield. The castle has an artwork of King Bowser on the top. A kick save is found on the left outlane. Yellow and blue Warp Pipes on either side of the middle act as slingshots, which powerfully eject the ball soon after it enters. Four sinkholes are seen throughout the playfield, most providing points or a bonus, depending on the situation. Two are seen either side of the field just below the slingshots, one above the third flipper on a raised platform at the top of the playfield and one just in front of the castle. This sinkhole has a plastic tube that runs down to the bottom right hole just above the right slingshot. A wireform ramp leads from the top sinkhole and drops the ball into the left inlane. A few of the sinkholes are able to light up one of the letters that spell S-U-P-E-R. There are three pop bumpers on the top half of the field. These pop bumpers toggle the lights to different types of bonuses the player may receive on the five spot targets.[3]

The aim of the game is to become Super Mario by spelling S-U-P-E-R, which then allows the player to shoot for the castle. Destroying seven castles in seven different worlds will rescue the Princess and the player is then able to enter their name and score. They will receive a replay if the high score to date is beaten. All castles destroyed will be carried over to the next game. This makes it possible to begin a game with six castles, and the player will only need to destroy one to win. But the score would be significantly lower in comparison to gameplay throughout all seven worlds. The player is initially given three balls, but more may be gained during play. 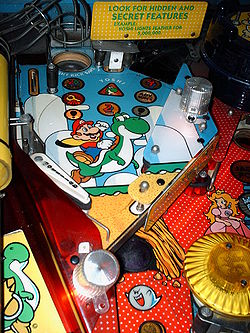 The Yoshi-themed area seen in the upper playfield.

The game consists of six different rounds, which provide temporary objectives in the game that can reward points for completing certain tasks. In order to play a round, the player must light three Shells, which can be done by hitting spot targets or ramp shots where shells are lit. Once done so, the player must obtain the Key by getting the ball in one of the three sinkholes when the Key light has been lit. The player can then select with the flippers which round they wish to play. If it is not selected within a few seconds, the system will choose whichever round the player is currently selecting. The six rounds and their description are as follows:

Entering a round as Super Mario doubles the value of that round, including extra balls. Each round will only last for about a minute. Once a round has been completed, it cannot be played again during the same game. Completing all six rounds in a game lights Castle Special.

To achieve multiball, the player must light 1-2-3-4 in sequence. Each number is situated within a different area of the playfield; "1" is on the left ramp, "2" is the Yoshi target on the raised area, "3" is the right loop shot that feeds the ball back into the bumpers and "4" is the shot made from the third flipper on the raised platform. Once these shots have been made, the player must hit the ball into the bottom left sinkhole to gain the multiball. There are two types of multiball; 2-ball and 3-ball. The latter can be played by being Super Mario when multiball is gained. The object of multiball is to get as many balls in the castle as possible. Each ball in the castle earns a jackpot, which begins at 5 million. As multiple balls enter the castle, the jackpot increases to 10, 20 and finally 40 million. Additionally, this total is increased during 3-ball.

The game’s video mode is shown after the ball has entered the castle and the Bullet Bill sequence is complete. The Dot Matrix Display seen on the light box will show what appears to be a classic Super Mario Bros. game, where the player runs and jumps across gaps in the ground with a Goal Pole and castle seen at the end. The right flipper is used to jump, while the left is to run faster. 10 million points are awarded for making it to the end; if the player holds the left flipper in for the whole level, the game will award 30 million points instead. When the last castle has been destroyed and the ball has drained, Mario will run across the screen towards the castle. If the player makes him jump during this sequence, they will also receive 30 million points instead of the normal 10 million.