Mario Tennis: Ultra Smash is a multiplayer sports game in the Mario Tennis series, developed by Camelot Software Planning, for the Wii U. It is the third home console installment in the series and the seventh overall. It was first released in November 20, 2015 in Europe and North America. Up to four players can locally play the game, while up to two players can also use its online capabilities to play with other people around the world.

The game, as an installment in the Mario Tennis franchise, features traditional tennis gameplay with various Mario series elements mixed in, such as the playable characters and the gimmicks introduced in courts. It retains several elements from two predecessors, Mario Power Tennis and Mario Tennis Open, while introducing Mega Battles and Jump Shots; Mega Battle is a mode where players can grow larger from picking up Mega Mushrooms to increase their offense and defensive capabilities while Jump Shots enable player to leap to heights to perform more powerful shots. The Wii U GamePad is taken advantage of in two player singles, where a second player can get a second screen in perspective of their character.[4] If players download the game from the Nintendo eShop, the software requires 888 MB to be installed.[5] The game also features amiibo support, where players can use compatible amiibo to train and play with a CPU-controlled character.

The game is played similarly to previous entries of the Mario Tennis series, and follows the basic rules of tennis. Players serve and hit the ball back and forth until one side misses the ball. Players earn 15 points for each successful shot, and win a game point if a player scores in their 40th point. If players are tied after the 40-point mark, a deuce commences, and either player has to score two consecutive points to win a game point. Winning a number of game points makes the player victorious in a set or a match. Matches can be divided into sets. If two players tie in a set, a Tiebreaker commences, where one player must reach seven points to win the set or match.

The game works with amiibo. When a compatible amiibo is scanned into the game, that character appears in the game as a computer partner that can be trained,[4] similar to Super Smash Bros. for Nintendo 3DS / Wii U. After every five matches in Knockout Challenge, it earns a random stat boost, and the amiibo character can get 10 in total. Players can access the amiibo training menu to change up stats, however, by spending coins to alter stat slots.[7] amiibo partners make it possible to play on 2 vs. 1 matches, though only with CPU opponents, making it the first and only Mario Tennis game where 2 vs. 1 matches are possible.[8]

Unlike other installments, Mario Tennis: Ultra Smash does not provide a left-handed option.

The types of shots in Mario Tennis: Ultra Smash. From left to right: Topspin, Flat, Slice, Lob, and Drop Shot.

All of the main five types of shots can be charged, in order to increase their power, by pressing the button or button combination before the ball arrives. While charging, movements are slower, so if the player needs it, the charge can be canceled by pressing

. All of the main five type of shots also have a Chance Shot version, activated by going in a colored area and executing the shot of the respective color. 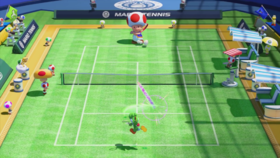 A Jump Flat. Note how the trail is different from that of the standard Flat.

Furthermore, Topspins, Slices, and Flats, in both the standard and Chance Shot version, can be performed as Jump Shots, executed by tapping the button corresponding to the shot twice, in which the character leaps before hitting the ball, resulting in shots that bounce higher. 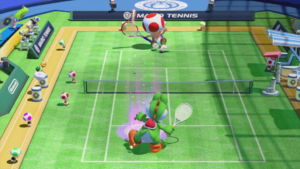 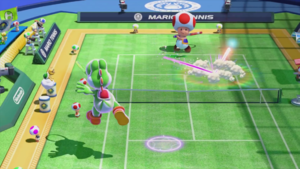 The Ultra Smash. Left: Toad has made a mistake and as a result, his shot is a high and slow Simple Shot, with purple circles around the trail denoting this. Right: after the mistake, Yoshi performs a Jump Flat on the Chance Shot area and, as a result, executes an Ultra Smash.

If the opponent has made a mistake that results in a slow ball flying high in the air, a Special Chance Shot area appears. If the player performs a Jump Flat on said Chance Shot area an Ultra Smash is performed, resulting in a more powerful Smash.

Peach serving on a grass court.

A screenshot in Mega Battle mode.

The default mode is the Mega Battle mode,[9] where Mega Mushrooms are randomly thrown into the court by a Toad that patrols each side, after a player serves the ball. If players run into a Mega Mushroom, they grow huge and get an advantage in ball stroke and ball reach. In doubles play, only one player per side can grow large at a time. This mode is for up to four players, and can be played with human- or computer-controlled opponents.

This is where tennis is played normally without Mega Mushrooms.[9] Standard mode has the Chance and Jump Shots, while Simple mode lacks Chance and Jump shots and is therefore pure tennis.[10][11] This mode is also for up to four players, and can be played with human or computer-controlled opponents.

Knockout Challenge is a single-player mode that replaces the Tournament modes from earlier installments of the Mario Tennis series.[9] Players try to beat an increasing number of CPU opponents, who gradually get harder over time.[7] The order of opponents is as follows: Toad, Luigi, Daisy, Yoshi, Wario, Sprixie Princess, Toadette, Boo, Peach, Waluigi, Donkey Kong, Bowser Jr., Rosalina, Mario, and Bowser (Dry Bowser in the 2nd sequence). Then the sequence repeats. After the 2nd sequence, the opponents will be randomized (though they'll never face the same opponent more than once in a row). If the player uses Toad or has Toad as an amiibo partner, the CPU-controlled Toad is substituted with Toadette. If the player uses one of the other characters or has one of the other characters as an amiibo partner, that character in the sequence is replaced by Toad. If the player uses Bowser or has Bowser as an amiibo partner, the CPU-controlled Bowser is substituted with Dry Bowser. If the player uses Dry Bowser, the CPU-controlled Dry Bowser is substituted with Bowser. If the player uses Dry Bowser and has Bowser as an amiibo partner, the CPU-controlled Bowser and Dry Bowser are substituted with Bowser Jr. The matches, by default, are Mega Battles (and Standard Tennis after the 2nd sequence) with Tiebreaker rules; the player has to win seven rounds in order to claim game victory. With every battle won, players earn coins, which can be spent on buying unlockables, such as star characters and courts.[7] amiibo characters can help the single players out; however, other human players cannot help the single-player.

The sole minigame of Mario Tennis: Ultra Smash, players rally a large ball for the highest score possible. After every 30 rallies, the ball gets smaller.[9][7] It can be played solo or for up to four players. When the game ends, players receive coins depending on how much the ball has been rallied.

Online can be played alone or with another player or amiibo character in Singles or Doubles. The game does not support lobbies or communities, whereas the only options are Singles and Doubles.[7] Similarly to Super Smash Bros. for Nintendo 3DS / Wii U, online play is split into two categories: Play for Fun and Play a Serious Match. Play a Serious Match settings lets players play in ranked settings to grow their standing compared to their online opponents, whereas, Play for Fun still sets up matches based on online ratings, but these ratings are not affected in this mode.[7] Players can choose to play a Mega Battle, Standard match, or Simple match. They can also choose whether to play a tiebreaker game or a two-game, one set match.

Players can spend coins earned from Knockout Challenge to unlock various items. The following is a list of unlockables from this menu.[12]

All unlockable characters can be bought for 5,000 coins in the rewards menu, or can be unlocked by meeting the following criteria below.[12]

These characters appear in the background as part of the crowd as world-building scenery. A Lakitu and a Toad watch over the court, where the Lakitu retrieves the ball if it hit the net or the player, or can no longer bounce. During Mega Battles, a Toad can, at random intervals, toss a Mega Mushroom into the court. A Magikoopa also appears in Knockout Challenge to make the CPU-controlled Bowser or Dry Bowser giant during the entire match. Because of this, the Mega Mushrooms are provided only for the human-controlled characters.

Mario Tennis: Ultra Smash features only one stadium, but players can choose nine different skins for the court, which affect ball behavior and/or character behavior in different ways.[7] The following skins can be selected:

A Luigi amiibo player being trained

Players can tap any compatible amiibo figurine into the game to help players out in Knockout Challenge and online play. When amiibo level up after completing a set amount of matches, a random stat out of the eight stats get enhanced. In addition, each stat has its own slot limitations: for example, an amiibo character cannot have more than three speed stats in their inventory. Once all ten stat slots are filled, the amiibo cannot obtain any more stats though players can remove gained stats for a fee of 5,000 coins, so the slot can be filled by another stat. These are the following stats that can be enhanced:

Mario Tennis: Ultra Smash was developed by Camelot Software Planning, who was responsible for developing all Mario Tennis titles, with assistance from Nintendo. Shugo Takahashi has directed the game, who was also the director of the previous title, Mario Tennis Open. The lead designers were also Shugo Takashi and Hiroyuki Takahashi. Motoi Sakuraba once again is responsible for the soundtrack for the game, as he was in other Mario Tennis titles. Just like in Mario Party 10, Rosalina's former voice actress Kerri Kane is mistakenly credited (misspelled as Kerry Kane), however most of the voices are recycled from Mario Kart 8, including Rosalina's, and she was voiced by Laura Faye Smith in that game.[13]

Mario Tennis: Ultra Smash received mixed reviews from professional critics with aggregate score of 58 from 58 critics in Metacritic[14] and 55.78% on Gamerankings based on 36 reviews.[15] Reviewers praised the graphics and presentation, but lambasted the stark lack of overall content and basic features, both offline and online, calling it bare-bones, especially when compared to the previous Mario Tennis games. Chris Carter of Destructoid was severely disappointed and harshly criticized the game, noting the lack of content, the forgettable jumpshot and Mega Mushroom gimmick, and the lack of lobbies or extras.[16] He ends by saying that players are "better off just playing any other previous game in the series, which is particularly easy to do since the first game is on the Wii U's Virtual Console for just 10 bucks." He gave the game a 5.5/10. Marty Sliva of IGN had a similar opinion, stating that "Mario Tennis: Ultra Smash is about as paint-by-numbers as you can get. The lack of modes, characters, and new ideas make it a step backwards from the series' debut on the Nintendo 64 back in 2000." He cites the Mega Mushroom feature as bad and gimmicky, appearing to be arbitrary and imbalanced. He also compared it unfavorably to its predecessors by stating "that Mario Power Tennis on the GameCube managed to include more characters, interesting modes, and varied courses a decade ago is a bit insulting." He gave it 4.8/10, a score labeled as "bad". Kyle Hilliard of Game Informer expressed similar disappointment, praising its core gameplay for being solid and fun, but wishing the game offered much more.[17]