Donkey Kong (alternatively Game Boy Donkey Kong, and Donkey Kong '94 in early development) is a Game Boy game released in 1994 by Nintendo. The game starts out with the premise of the original 1981 Donkey Kong arcade game. However, this game qualifies as both an extension and a standalone title; it features 97 stages beyond its original premise. It acts as a predecessor to Mario vs. Donkey Kong and, less directly, Super Mario Bros. Deluxe and the Super Mario Advance series.

Donkey Kong is the first game in the Mario franchise with specialized support for colored graphics on the Super Game Boy peripheral for the Super Nintendo Entertainment System. Its Super Game Boy border resembles the arcade cabinet of the original Donkey Kong arcade game. The game has slight audio enhancements on the Super Game Boy: Pauline's distress cry sounds closer to a realistic cry for help (the Super NES's sound chip supports the inclusion of voice samples), and the credits theme was also enhanced.

Donkey Kong is one of the earlier re-releases on the Nintendo 3DS's Virtual Console, where it was released internationally in June 2011. It was released in South Korea on February 3, 2016.[2] 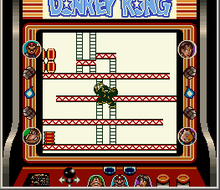 Donkey Kong carrying Pauline to the top of a construction site.

The player takes the role of Mario. The large ape Donkey Kong kidnaps Mario's lady friend Pauline and carries her off to a construction site. In a repeat of the 1981 arcade classic, Mario follows him up to the highest point and makes Donkey Kong fall off the platforms by pulling out the rivets supporting them, causing Donkey Kong to fall a height of 100m, reuniting Mario and Pauline, just like the events that took place 13 years ago. However, Donkey Kong unexpectedly recovers, takes Pauline, and escapes with her into the Big-City. Mario pursues the two.

What follows is a chase throughout many different locations. Mario fights and defeats Donkey Kong at the end of each world, but Donkey Kong always stands up again and takes Pauline to the next location. Donkey Kong is aided by many of his friends as well as his son Donkey Kong Jr., who try to hinder Mario's progress. In the end, Donkey Kong escapes to the Tower beyond Rocky-Valley, where he and Mario have a confrontation on the top. After his defeat, Donkey Kong falls off the Tower, but he then takes many Super Mushrooms to augment his size to giant proportions. Mario faces the Giant Donkey Kong in an epic final battle. After the ape's final defeat, Donkey Kong falls from the Tower once again as Mario and Pauline are reunited once again. The ending scene shows Mario and Pauline in the Mushroom Kingdom as Pauline gives him a Super Mushroom to turn Mario into Super Mario. As Mario becomes super, Donkey Kong (now being back to normal) falls down on top of him. But because Mario now has super strength, he is able to lift up Donkey Kong. Having believed to be captured by both Mario and Pauline, Donkey Kong is left calling for help the same way Pauline did throughout the game. Donkey Kong Jr. jumps into the shot as a photo is taken and the credits roll. The ending photo of the game during the credits shows Mario, Pauline, Donkey Kong, and Donkey Kong Jr. posing in front of Rocky-Valley for a holiday photo, indicating that they have all made amends with each other. 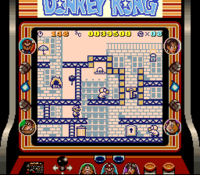 The game starts out with four simple levels that Mario must scale in order to reach Pauline. These four levels are simplified versions of the original Donkey Kong arcade game. After reaching the top of the structure, Donkey Kong flees with Pauline into the city and beyond. The rest of the game's stages are divided between regular puzzle levels as well as more showdowns with Donkey Kong.

Each world has a varying amount of puzzle levels in which Mario needs to work against time to bring a key to a door to unlock it, thus advancing to the next level. The puzzles consist of building platforms and ladders and using them before they disappear, flipping switches, jumping on moving platforms, avoiding enemies and utilizing conveyor belts. Sometimes, Donkey Kong Jr. gets in Mario's way by flipping switches or throwing poisonous mushrooms at him to shrink him. All puzzles require the player to carefully time jumps and pay attention to the physics of the game - Donkey Kong thus is a cross between a platformer and a puzzle game.

As well as the puzzle levels, each world has at least two battles with Donkey Kong; one takes place part-way through the stage, and involves Mario reaching Pauline while avoiding the debris falling on him as Donkey Kong causes an impact. The second takes place at the end of each stage, and involves avoiding the barrels or other objects that Donkey Kong throws at Mario, picking them up and throwing them back at him. After beating a Donkey Kong boss level, there is a short cutscene of Mario chasing Donkey Kong while showing off how to do a special move in the game to the player. The player also gets one extra life for every 100 seconds of time left they had for the previous four levels, rounded up.

Each stage has a time limit in which it has to be beaten. It also keeps track of the high scores for each level. Whether the player made a new record is indicated on the Stage Clear screen after a Donkey Kong boss fight. The current high scores can also be viewed by pressing Start or Select.

In the final 'Tower' stage, each level consists of chasing Donkey Kong and Donkey Kong Jr. to the top of the tower, avoiding their attacks, eventually trapping Junior in a cage, and defeating a giant Donkey Kong in the final battle. 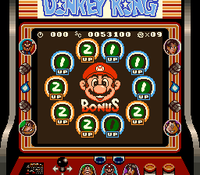 The Wheel of Fortune mini-game. 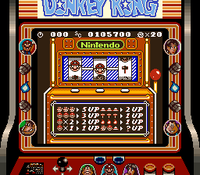 There are also three items left behind by Pauline in each puzzle level - a parasol, a hat and a bag. Picking all three up before finishing the level unlocks a bonus mini-game in which the player can pick up extra lives. In The Wheel of Fortune mini-game, all the player has to do is to press

to stop the wheel to gain either 1, 2 or, in later worlds, 3 lives. It is not possible to lose in The Wheel of Fortune.

In the Slot-Machine mini-game, the player has to press

three times to stop each reel of the slot machine. The icons appearing on the reels are Mario, Donkey Kong, Pauline's hat, a hammer, and a Fireball. Mario gains lives for getting one of the following combinations:

Mario is controlled with the

. The physics in Donkey Kong are vastly different to those found in the Super Mario series. The player can jump with the

. Mario's jump allows him to jump on enemies, but it does not go up considerably high. When falling farther than his jump height, Mario does a somersault which gives him a little bit of momentum. If he lands on a small platform, it can cause him to roll over the side and fall off. If he falls further, he gets stunned and is unable to move for several seconds upon hitting the ground, temporarily making him vulnerable. If he falls even farther, he lands on his head and dies upon impact with the ground.

Mario only has one hit point. While he is carrying any item, object or enemy, however, he cannot die. If he gets hit, he instead drops the item and becomes invulnerable for a short amount of time. This can save Mario for most kinds of impending deaths - he even survives spikes with it. If he falls too far, however, he drops the item in mid-air.

Donkey Kong features the enemies from the original arcade game Donkey Kong and many individual enemies of its own that are only found in this game. It does not feature any enemies from the mainstream Mario games, except for Spark, who appears in Super Mario Bros. 2. Many enemies in the game have a different appearance, but the exact same behavior. The appearance usually depends on the current world.

Early footage of the game was featured in a promotional tape sent to Nintendo retailers in late 1993 and early 1994.[3] Differences include the sprites being closer to the original Donkey Kong, the level timer starting at 999 instead of 100, and various different enemies and designs. Footage of a later build featuring a similar Donkey Kong with a tie and the final Pauline is included in a Nintendo Power Previews LaserDisc used in store kiosks.[4] Nintendo Power magazine shows additional differences, such as a world map having changes such as an early icon for Donkey Kong. At some point, a "Giant Squirrel", pictured below, was a boss that Mario had to fight. A noticeable difference, besides that Donkey Kong and Donkey Kong Jr. are normally the only bosses fought, is that the stage has a very basic layout that does not fit with the more puzzle-like layout of the other stages.

The game has been received positively overall. Nintendojo named it one of the best Game Boy games ever made and rated it 9/10. They noted the game's innovate gameplay and its "seamless fusion" of the original arcade game with puzzle elements.[5] The German magazine Video Games noted that the game "belongs into every Game Boy collection" for its "love of detail and elaborate platform levels". They praised the game for providing new surprises in each new world, which keep the player at a high degree of motivation, and also for its battery storage. They gave the game 90%.[6] IGN.com said that the game took the "classic design to new heights with fresh action and puzzle elements that faithfully retained the Donkey Kong arcade game's look and feel". They said it was a "classic and amazingly fun" Game Boy game.[7]

Challenged by many perils, Mario™ must reach his archrival in order to save our damsel in distress. As Mario makes his way through a series of platforms while jumping and dodging obstacles, he will also need to gather disappearing keys to unlock doors to hidden rooms. Donkey Kong will stop at nothing to confuse and trap our hero. Help guide Mario as he journies to the top! With 10 stages and 100 tricky levels to solve, it is a long trek to the final confrontation!

For a complete list of media for this subject, see List of Donkey Kong (Game Boy) media.