From the Super Mario Wiki, the Mario encyclopedia
(Redirected from Backflip)
Jump to navigationJump to search

“If you jump while crouching with

, you'll do a backward somersault! You can go super high!”
—Board, Super Mario Galaxy 2

The Backward Somersault (alternatively spelled backward somersault), referred to as the Backflip by Prima Games' guides and Crouch Jump on the official Super Mario 3D Land website, in the Super Mario 3D World manual,[1] and in Super Mario Maker 2, is an advanced type of jump introduced in Donkey Kong for the Game Boy. The player can perform it by pressing

while moving and pressing

in the opposite direction. Backflips allow Mario to quickly reach higher platforms. They require movement to execute them, so they cannot be performed on small platforms easily. The move can also be performed in Mario vs. Donkey Kong in the same way. 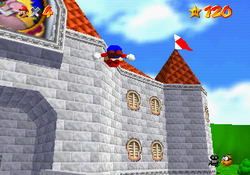 The Backward Somersault returns in Super Mario 64, and it has been present in every 3D Mario game since, along with the similar Side Somersault. To perform it in this game, the character must jump while crouching. The character jumps high and flips over in midair, moving backwards. The character may chain it to a Ground Pound. The character can also control the backwards horizontal distance by holding back on the Control Stick.

This move is also present in Donkey Kong 64, working as it did in Super Mario 64, though it can also go straight up and forwards.

In Super Mario Sunshine, though Mario cannot crouch, he can perform a Backward Somersault if he sprays water, then lets go of the pump while jumping. Doing so creates a blast of water.

In Super Mario 64 DS, Luigi spins to slow his descent after performing this move.

In Super Mario Galaxy 2, this move is also used to manually dismount Yoshi; it thus prevents him from ground-pounding.

The move returns in Super Mario Run, where characters perform it if the screen is tapped while they are on a Backflip Block.

In Super Mario Odyssey, Mario can perform Backward Somersaults continuously if any of the shoulder buttons (