Not to be confused with Digga-Leg.

“Wahahaha! You made it! But I won't even need my dad's help to take care of you! Go at 'em, Megaleg! Stomp 'em with the power of your Grand Star!”
—Bowser Jr., Super Mario Galaxy

Megaleg is a boss in Super Mario Galaxy. It is a gigantic mechanical construct with a vague resemblance to a Snifit. It is found in Bowser Jr.'s Robot Reactor, and is owned and possibly commanded by Bowser Jr.

The concept of climbing atop and moving on a large being was originally intended to be used in the final fight against Ganon in The Legend of Zelda: Ocarina of Time, but this was scrapped due to the fact that one would be unable to see Ganon while atop him. However, it was later reused in Super Mario Galaxy, much to the excitement of the development team.[1] Megaleg underwent several changes prior to the release of Super Mario Galaxy. In the E3 2006 demo of the game, there was nothing in its cage. The earliest version of Megaleg was labeled "BossCrab", which had a different body design, no nose or mouth, four legs, and a half oval shaped head.[2]

Megaleg standing on the Robot Reactor.

Megaleg is incredibly large and lives on a planet just big enough to hold it. It has three long legs, like a tripod, and each leg has various tricks and traps designed to trip Mario up. It has fly-like eyes with huge lights beaming out of them. On top of Megaleg's head is a red cage with a rotating lighthouse-like light on top that contains a Grand Star. Megaleg is much bigger than Digga-Leg, a similar boss encountered in Super Mario Galaxy 2.

Mario being followed by a Bullet Bill on Megaleg's head. 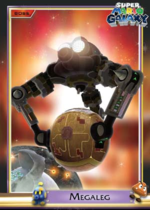 A Grand Star is at stake in the battle against Megaleg, so Mario knows it won't be easy. With its flylike, light-beam eyes and three huge mechanical legs, this boss lives on its own planet in Bowser Jr.'s Robot Reactor. To defeat Megaleg, confuse the monster's own Bullet Bills so that they slam into its head and destroy it.