The Freezeflame Galaxy is one of the five Bedroom galaxies in the game Super Mario Galaxy. It requires the use of both the Fire Flower and the Ice Flower to complete. Half of this galaxy consists of freezing water and ice, while the other half consists of fire and lava. However, the cold portion of this galaxy is featured most prominently; four missions in this galaxy solely take place on icy planetoids. Baron Brrr resides on the icy half of the galaxy and acts as the galaxy's boss. The galaxy appears to be mainly divided into three large planets: one is an icy planet, the second is a lava planet, and the third is a combination of both fire and ice with a rock-like core. There are also two minor planetoids of note; the first of which resembles a large ring of ice, and is the first planet that Mario lands on when he enters the galaxy. The second planet is one that features alternating paths of both lava and ice, and is first encountered in the Hot and Cold Collide mission. This area is also where Cosmic Mario is raced later, only without the lava parts present. Auroras can sometimes be seen around a few of the planets in this galaxy. The galaxy's name is presumably a combination and oxymoron of the words "freeze" and "flame", or a pun off of the term "Freezeframe".

While this galaxy does not return in Super Mario Galaxy 2, the Shiverburn Galaxy is similar to this galaxy in both its name and concept. The two galaxies also share the same music.

NOTE: Unless otherwise noted, all names are unofficial.

Mario on the Starting Planet.

The ice planet infused with balls of lava.

The starting planet of the Freezeflame Galaxy consists of nothing more than a thin ring of ice with several ice crystals and stone stumps on the surface. Two rolling boulders are also found rolling along the inner side of the ring. The first time Mario lands here, he must ice skate around it to catch a small Penguin and make the Launch Star appear. In Hot and Cold Collide, this planet becomes infused with balls of fire and lava, making it difficult to get around without getting burned.

One of the many icy cliffs on Freezy Peak (towards the back).

Freezy Peak[1] is essentially the main planet in the galaxy, as it is the most often visited by Mario. It is a large planet that consists of a very high and rocky mountain with three levels of freezing lakes of freezing water. There is a large ice slide at the beginning of the planet and a second, smaller one hidden above the first lake. After taking the Launch Star to this planet, Mario will land on the first ice slide and end up on a small icy area inhabited by Goombas. Just after the three lakes are several icy cliffs that Mario must scale in order to reach the summit of the planet. Baron Brrr resides on the third level of the mountain.

The outside of the Lava Core Planet.

Mario in the Lava Core Planet.

This planet is probably the largest planet encountered in the galaxy. It consists of a large round sphere of cooled magma, through the center of which runs a large fissure filled with lava. When Mario flies to this planet, he lands on a small stone platform located within the fissure. There are also multiple other platforms and temple-like structures located inside the fissure, which prevent Mario from falling in the lava. In Freezeflame's Blistering Core, he must follow these platforms to the center of the planet where he will find the Power Star for that level. The platforms and structures seen within the fissure seem to be all that remains of what appears to be a ruined civilization that has now been inhabited by multiple Ground Urchins and Li'l Cinders.

Mario flying toward the Hot and Cold Planet. 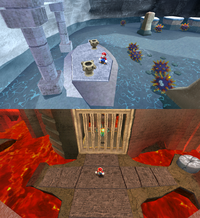 The two sides from the Hot and Cold Planet.

This planet is essentially a large sphere with two circular openings on either side that connect across the middle of it by means of a small passageway. One of the openings is filled with freezing water and many Urchins. There are also a few snow covered platforms sticking up out of the water on this side of the planet. The second of the two openings is filled with burning lava. There is a stone section with a double-sided cage that holds a Fire Flower within it in the middle of the lava. In the Hot and Cold Collide mission, Mario must Spin a valve on one side of the cage in order to unlock it and access the Fire Flower, which is needed to complete the level. The tides on each side of the planet alternate with each other depending on how high one of the tides is in relation to the other. The background music also changes depending on which side of the planet Mario is on - the theme from the Freezy Peak Planet is used for the ice side, but the theme from the Lava Core Planet is used for the lava side. If the player looks up by the planet, they can see the Power Star halo effect. This is the location of the Power Star from the Hot and Cold Collide level. This halo is present on all levels, regardless of the scenario that was chosen.

Ice Mario skating across the Ice and Lava Platforms.

These planets are composed of many small non-gravitational alternating platforms made of pure ice or lava. There are also several rock platforms with snow on them, which serve as resting platforms for Mario when he ice skates across it. In Hot and Cold Collide, this is the final planet that is encountered in the level. Mario must use the Ice Flower to ice skate across the lava portions (as well as the ice portions) to reach the Power Star hovering over the last platform. In the mission Frosty Cosmic Mario/Luigi Race, the lava platforms are replaced with additional ice platforms, meaning that the use of the Ice Flower is no longer needed to reach the Power Star on the final platform. This planet is also surrounded by multiple black holes, most of them being of substantial size, which will suck Mario and Luigi in if they are not careful. 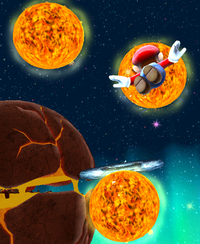 Luigi on the surface of the Hot and Cold Planet