Not to be confused with Super Star.

Mario near a Rainbow Star in the Sky Station Galaxy 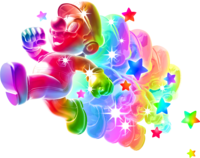 Artwork of Rainbow Mario after collecting the Rainbow Star

The Rainbow Star is an item that appears in Super Mario Galaxy and Super Mario Galaxy 2; it is the Super Mario Galaxy equivalent of the Super Star, used to prevent confusion between Super Stars and Power Stars. When collected, it transforms Mario into Rainbow Mario (or Luigi into Rainbow Luigi), causing him to become rainbow-colored and leave a trail of light behind him whenever he runs. In this form, he is invincible, releases Star Bits from damaging enemies, can break through certain objects and obstacles (such as Chomps and Boulders), can run faster, and can jump both farther and higher. As the power-up begins to wear off, the music, along with Mario's running speed, will get faster and faster until it wears off completely. The only mission in Super Mario Galaxy where a Rainbow Star is required is The Golden Chomp.