Stars are a race of celestial beings who have played major roles throughout the Mario franchise.

Sentient stars first appear in Super Mario Land 2: 6 Golden Coins, both as a background element in the Space Zone map, and an obstacle in the star stage and Secret Course 2. In those levels, they have angry expressions and act similarly to spikes, damaging Mario when touched. Some stars also move horizontally and vertically, forcing the player to maneuver around them safely.

In Super Mario RPG: Legend of the Seven Stars, Geno is a starlike being from Star Road who was sent by a "higher authority" to aid the Mushroom Kingdom in its hour of need against the Smithy Gang. He decided to join Mario on his quest to save the kingdom when he realized he could not do it alone. Although Geno is a type of star being, it is unknown if he is directly related to the star species.

In Paper Mario, Stars are known to live in a city above Shooting Star Summit, called Star Haven where they are led by the Star Spirits. Stars begin their lives as Star Kids in Starborn Valley under the care of Merle and some Ninjis. Twink, a notable Star Kid, aids Princess Peach while she is kidnapped by Bowser. 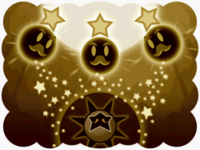 The elder Star Sprites sealing away the Dark Star

In Mario & Luigi: Bowser's Inside Story, a species of Star known as Star Sprites appear. Unlike regular stars, Star Sprites have spherical yellow bodies with small feet and have stars perched on their heads. Only four members of this species are shown, the first being Starlow, who appears in the present time-line of the game, and the other three are elderly Star Sprites, who were shown in a flashback and were responsible for sealing away the evil Dark Star.