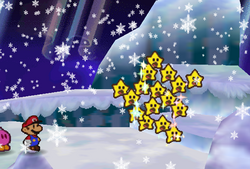 The Star Kids posing as Monstar, fleeing from Mario and Bombette

“Hey, do you think I can rise into the sky soon?”
—Star Kid, Paper Mario

Star Kids are young stars that appear in Paper Mario. They are born in Starborn Valley, where they are raised by a group of Ninji who live in the area. Once they eventually mature, they ascend towards Star Haven to join older Star Kids and the Star Spirits. From there, they grant the wishes of people on the world below. By doing so, they have the possibility to become a Star Spirit themselves.[1]

During the events of the game, the Star Kids are unable to rise into the sky due to Bowser stealing the Star Rod from Star Haven. When Mario approaches Starborn Valley, they attempt to prevent Mario from entering their village by combining to create a creature called Monstar. After Monstar is defeated and fades away, the Star Kids composing it flee, allowing Mario to enter the village. Merle then explains that the Star Kids use that form to keep Bowser's followers out of the valley, and that no one expected Mario's quick arrival. As noted by the Ninjis, Star Kids are full of energy. After Mario has rescued Kalmar, they express excitement to rise up to Star Haven.

The only named Star Kid is Twink, who helps Mario throughout his journey and acts as Princess Peach's partner.