Watt is a female baby Li'l Sparky and Mario's sixth party member in Paper Mario. Although Watt's age is unconfirmed, it would appear that she is a young child because of her pacifier. Her Super Paper Mario Catch Card description also implies that she is young. 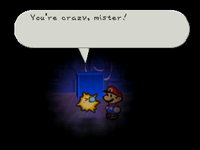 Mario finds Watt while traveling through Shy Guy's Toy Box. He eventually comes to a dark room inhabited by the Big Lantern Ghost. The battle against the ghost involves attacking the lantern he carries to make the room brighter, and after his defeat Mario can break open the lantern and find Watt inside.

Watt explains to him that the Big Lantern Ghost had kidnapped her and trapped her in his lantern. She tells Mario that she heard some of the Shy Guys talking about him, and she volunteers to join him and his party on his quest. Watt's field ability allows Mario to hold her like a lantern, illuminating dark places and allowing him to find invisible boxes and items. Watt's main attack also has the ability to automatically override an enemy's defenses, making her a valuable partner in many battles.

Later in the game, the player can find two letters in the Toad Town Post Office, one from her mother and another from Fuzzipede. At the end of the game, she is conversing with a group of Shy Guys, and she appears to have befriended them.

Goombario can use Tattle on a lantern holding Watt only after Mario defeats the Big Lantern Ghost but before Mario breaks the lantern to release Watt.

Like the rest of Mario's partners from the first Paper Mario, Watt was going to appear in some fashion.

In Super Paper Mario, Watt appears as a Catch Card that could be found in the Flopside Pit of 100 Trials. She could also be seen very briefly at the beginning of the game, where she, along with all the other partners in the Paper Mario series could be seen in a photograph at the Mario Bros.' House. 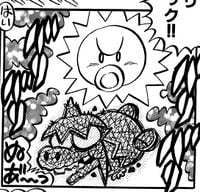 Watt appears also as one of Mario's various partners in the Paper Mario arcs of Super Mario-kun. Unlike in the games, Mario and his partners scare away the Big Lantern Ghost by removing its robe. Mario then breaks the lantern with a hammer to reveal Watt inside.

Watt is known to have a mother, who is unseen and unnamed. Watt speaks of her occasionally and even receives a letter from her in the Toad Town Post Office. Though her mother is mentioned several times, no mention of Watt having a father is ever made.

Card Type: Rare
Card Description: This is Mario's good buddy Watt from Paper Mario. This guy was pretty bright for his age!