Albino Dinos are white colored variants of Dino Rhinos, hence their name, that reside in the Crystal Palace during the events of Paper Mario. 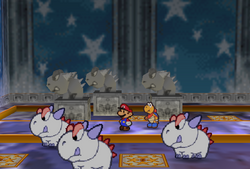 Mario, near three Albino Dinos in the Crystal Palace

Three Albino Dinos can only be found in the room preceding the Crystal King's lair. They are harmless and do not attack Mario or even move at all unless interacted with. In order to pass the Albino Dinos' room and battle the Crystal King, Mario has to solve a puzzle that involves pushing statues into the correct positions. In order to change the direction in which he can move these statues, Mario must speak to an Albino Dino in a certain manner, such as approaching it from the left side to make a corresponding statue face left.

Albino Dinos were originally going to be an enemy species in Paper Mario; however, they were removed as enemies from the final version of the game. The stats of the Albino Dino, along with Goombario's Tattle for them, still exist in Paper Mario's coding.