Double Mario is a form of Mario obtained by obtaining a Double Cherry. Unlike most forms of Mario, his physical appearance does not change when he becomes Double Mario, but instead gains a copy of himself that copies his every move.

Double Mario makes its first appearance in Super Mario 3D World, and reappears in its Nintendo Switch port exclusively in the Super Mario 3D World mode. The player controls all of the Marios simultaneously. The clone can be separated by ramps, ledges, and other obstacles. Double Mario can be stacked with other power-ups, allowing the clones to use whatever power the player currently is using. If the character or one of the clones gets a different power-up from the one they are using at the moment, all of them are affected. If Mario gets another Double Cherry in this form, more clones will be added, to a maximum of five clones per player. If a character Ground Pounds on another player's clone, then that clone will transform into that character's clone. The clones have no physical difference from the original, unless the original is wearing a crown, or a reserve item is used, because it will come out from the original character.

If a clone is damaged, falls down a pit, or is off-screen for too long, it will disappear. There is no need to keep track of the original, as the last clone standing after being attacked, regardless of the player's position, will end up being the original and will take normal damage from then on; thus the clones act as protection for the player. If the farthest clone is trailing behind the group, it will speed up to reach the pack.

Bowser obtains this form as Meowser during the second phase of the final battle. Like the other character's doubles, his doubles have no physical difference between each other. However, Meowser's doubles move independently from one another.

The Double Mario power originated when a member of the Super Mario 3D World development team accidentally placed two player-controlled Marios in a level. When the supervisors saw this, they liked it and decided to keep it in the game.[1]

While Double Mario doesn't appear in Super Mario Maker 2 as usuable form, knocking on a Warp Door in the Super Mario 3D World theme may cause Weird Mario to appear in this form (as two Weird Marios).

In Captain Toad: Treasure Tracker, Captain Toad and Toadette can use the Double Cherry to create duplicates of themselves, which function identically to how they do in Super Mario 3D World. 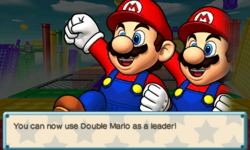 Double Mario appears in Puzzle & Dragons: Super Mario Bros. Edition as a Leader, available with the game's digital update to version 2.0, unlocked after earning an S rank or higher in Course 2 of the Fixed Challenge mode in Score Attack. Double Mario is a Fire/Fire attribute teammate with an HP rating of 3/6, an ATK rating of 4/6 and RCV rating of 4/6. Double Mario's Skill, Double Attack, changes Light and Heart Orbs on the Orb field into Fire Orbs, while his Leader Skill, Double Dance, raises the ATK of the entire team by 2.5x if the player clears a Fire combo, or by 4x for two Fire combos or more. Double Mario uses Fruit and Rare Fruit to raise his Skill Levels.

Double Luigi appears as a Leader as well, unlocked after earning an S rank or higher in Course 2 of the Free Challenge mode in Score Attack. Double Luigi is a Wood/Wood attribute teammate with an HP rating of 4/6, an ATK rating of 4/6 and RCV rating of 3/6. Double Luigi's Skill, Double Jump, changes Water and Dark Orbs on the Orb field into Wood Orbs, while his Leader Skill, Double Step, raises the ATK of the entire team by 2.5x if the player clears a Wood combo, or by 4x for two Wood combos or more. Double Luigi shares the same Skill item requirements as Double Mario.