“When the beast awakens, so shall I...”
—Giga Bell, Super Mario 3D World + Bowser's Fury 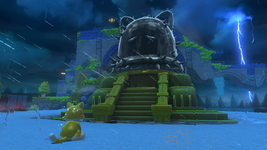 Giga Bells are power-ups that appear in the Bowser's Fury campaign of Super Mario 3D World + Bowser's Fury. A Giga Bell transforms Mario into Giga Cat Mario, but its power can only be accessed by collecting Cat Shines. Unlike most power-ups in the Mario franchise, Giga Bells are capable of speech. They resemble standard Super Bells, but are much larger, with cat ears and whiskers, green eyes, and a more orange coloration in their active state, with their dormant state depicting them as grayed-out and stone-like. When they become available for use, they emit a ring similar to but much deeper than that of Super Bells, in addition to a low-pitched meow.

After Bowser Jr. covers Bowser with black goop and turns him into Fury Bowser, the goop spreads throughout Lake Lapcat, including onto the three Giga Bells of the area. Each Giga Bell has four major islands surrounding it, which altogether comprise each of three major regions: the Lakeside, Ruins, and Wasteland. The Lakeside region is available to explore after Mario collects the "Make the Lighthouse Shine" Cat Shine on Fur Step Island. After Fury Bowser is defeated once, the Ruins region and its Giga Bell will appear. After he is defeated three times, the Wasteland region and its Giga Bell will appear.

Each Giga Bell rests on a pedestal with a short staircase leading to the top. Several coin piles appear on the highest step. When a Giga Bell is first encountered, it will be corrupted by black goop, and Mario takes damage if he touches it. Mario must collect a specific number of Cat Shines to cleanse all available Giga Bells of goop, which is displayed if Mario stands in front of it. This number is initially five, and grows after each time Fury Bowser is defeated, changing to fifteen, then twenty, then forty, and finally fifty Cat Shines required to activate the Giga Bells. After all five missions have been completed on an island, leaving and returning to it will display the text "(number)

to awaken (Japanese: 目覚めよ！ギガベル, Mezameyo! Giga Beru)", indicating how many Cat Shines are left to collect to activate any available Giga Bells.

When enough Cat Shines are collected to meet the required number, their power will remove some goop from every available Giga Bell, revealing a stone-like appearance. The Giga Bells will then remain inactive until Fury Bowser rises out of the Fury Sun and begins rampaging. Once a rampage begins, any available Giga Bells will immediately become available for use, signified by a cutscene showing them activate and a bright light appearing over each one. If a rampage ends before Mario collects a Giga Bell, it will return to its inactive state. If Mario collects a Giga Bell during a rampage, a cutscene plays showing him transforming from Cat Mario into Giga Cat Mario, regardless of the power-up form he was in before the cutscene. This enables him to battle Fury Bowser directly.

In the final boss battle of the campaign, Giant Bowser gathers all three Giga Bells to prevent Mario from using them and encases them in a crystal ball. Mario must ram Plessie into this ball multiple times until it breaks. Plessie and Mario then simultaneously collect all three Giga Bells, at which point Plessie enters his own Cat form, defeating Bowser and returning him to normal.

After the main story of the campaign is completed, all three Giga Bells are completely cleansed of goop. Their tops are now accessible, and Ground Pounding atop a Giga Bell in this state rewards the player with a Super Bell.