Green Coins[1][2] are a variety of coins that first appear in New Super Mario Bros. U. They are spawned from Green Rings.

In New Super Mario Bros. U, New Super Luigi U, and their port New Super Mario Bros. U Deluxe, after going through a Green Ring, it spawns one group of three Green Coins appearing at a time while rotating clockwise in a pattern of a three-leaf clover (with the coins still spinning). They disappear after three seconds if all of them are not collected in time. The timer resets when the next group starts appearing in a different spot after the previous group has been collected. Only five groups of three Green Coins are collected to clear, with a total of fifteen individually. When a Green Coin is collected, a green numbered text appears based on the corresponding amount collected. The effect they have is very similar to that to Red Coins, as collecting all of them gives the player a power-up or 1-Up Mushroom. They use the same sound as yellow coins if only one or two of them in a group are collected, but collecting all three of them uses the same sound effect as collecting a Red Coin with the pitch incremented with each group collected. Each Green Coin is worth one yellow coin.

Green Coins, also referred to as Green Star Coins[3] in the Prima Games guide, reappear in Super Mario 3D World and its port Super Mario 3D World + Bowser's Fury, this time resembling small Star Coins. After going through a star-shaped Green Ring, eight Green Coins start to appear separately like Red Coins, though they only appear for a limited time and disappear if they are not all collected in time, but if the player collects them all within the time limit, a Green Star appears on the same spot where the last Green Coin was collected. When a Green Coin is collected, a dark-green numbered text appears based on the corresponding amount collected. They also make a distinct sparkly sound when collected with incremented pitch with each one collected. Green Coins are once again worth one yellow coin and 100 points.

Green Coins appear in Mario + Rabbids Sparks of Hope, functioning similar to how they do in New Super Mario Bros. U. Once all Green Coins in each world are collected, a Planet Coin is rewarded along with a chest containing regular coins. 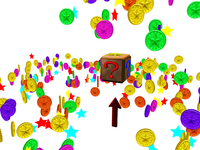