Mario Coins take the place of regular coins for players using a Mario Card. There are 25 Mario Coins located in each course, except in Challenge games. In Time Attack, this is reduced to 10 if in 150cc (this does not apply to 100cc). If a player collects a certain number of Mario Coins, they will gain a special private kart for the character or a character-exclusive special item. Even if the player loses coins by bumping into a wall or taking damage, it will still count towards the player's Mario Coin total at the end of the race (lost coins that regenerate on later laps are instead normal coins). Bonus Mario Coins are awarded for the player's finishing position (finishing time in Time Attack) and their performance in the Challenge game if one is played.

The following list shows the three ways Mario Coins are distributed at the end of a race:

This means that the maximum number of Mario Coins that can be collected in one race is 55 in Grand Prix (assuming 15 MARIO COIN earned in Challenge game), 35 in 150cc Time Attack, and 50 in VS Race/100cc Time Attack. 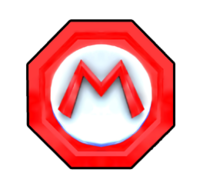 The Mario Coin reappears in Mario Kart Arcade GP DX, the sequel to Mario Kart Arcade GP 2. Unlike the previous game, Mario Coin appears on all game versions except v1.06 of the international version whether the player is using save data or not. In international versions on versions before v1.06, it serves no purpose. There are now 35 Mario Coins laid out on each track. For every 50 Mario Coins collected, the player gets a Slot Chance where the player can unlock an item, special kart, or an extra character.

There are three ways Mario Coins are distributed:

This means that the maximum number of Mario Coins that can be collected in one race is 75.