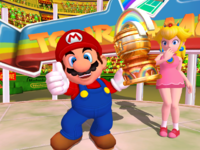 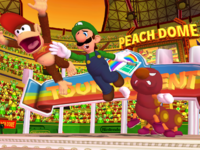 The Rainbow Cup in Mario Tennis and Mario Power Tennis is the first of the Star Tournaments, which is unlocked by completing the normal tournaments and unlocking the star rank for the character to participate. Its difficulty is comparable to Mushroom Cup and Flower Cup, although players and opponents hit stronger due to the star rank. In Mario Tennis, the Rainbow Cup takes place in the Hard Court. In Mario Power Tennis, the tournament takes place in the Peach Dome Hard Court, similar to the previous game. The first two matches have 3 sets and 2 games, while the last match has 5 sets. Aesthetically, it takes place during the day and progresses to sunset in the last match. When players clear the Rainbow Cup, the Moonlight Cup is unlocked.

In Mario Tennis Open, the 1-Up Mushroom Cup is the Rainbow Cup's successor.

The Rainbow Cup has made an additional appearance as a trophy and a set of tracks in Mario Kart Arcade GP and Mario Kart Arcade GP 2. It is unlocked only when players complete the previous five cups in the games. The challenge for the cup is a race against Robo Mario. Completing this cup allows the player to use a character-exclusive item, such as the Star for Mario and Luigi.