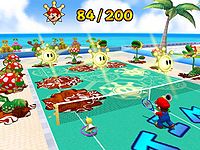 Tic-Tac-Glow is a minigame that appears in Mario Power Tennis.

The game takes place in Delfino Plaza Court, in which the player must shoot water balls to the opposite field filled with goop (3x3 goop spots) to free Shine Sprites. To score points the players take turns trying to clear three squares of goop with the shine sprites underneath them, much like how the game of Tic-Tac-Toe is played. This is the only minigame in Mario Power Tennis that involves players taking turns. Water balls are shot out by pressing on buttons to turn on the water nozzles only on the GameCube version. After a square is cleaned, Piranha Plants will soil the square again allowing the player to accumulate points.

In the Wii version, the water balls are automatically shot out from the water nozzles instead of pressing the buttons on the floor.